Kiersten White Returns To BUFFY-Verse With CHOSEN Cover and Excerpt 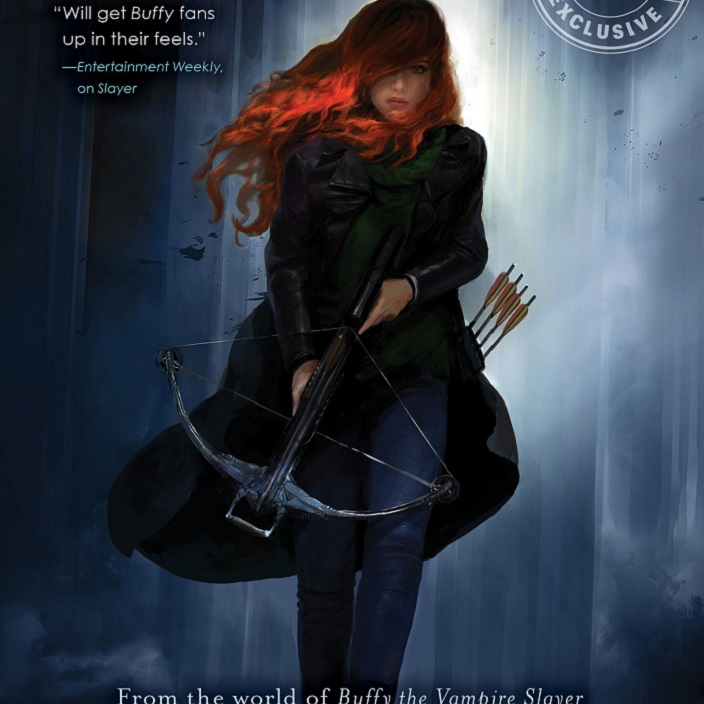 In Slayer, Kiersten White introduced Buffy The Vampire Slayer fans to Nina, the next-generation slayer taking up the mantle behind her idol, Buffy. Now, Nina is back to continue her adventure in Chosen!

The sequel follows Nina right were the first novel left off– In Watcher’s Castle building a new world. Unfortunately, her idyllic vision of a better future is going a little rougher than she imagined. It doesn’t help that her Slayer powers haven’t been the same since they were temporarily taken over by an evil succubus. Of course, she doesn’t have much time to figure it all out, given that another dark, potentially apocalyptic event seems to be on the horizon.

EW has the first look at the stunning new cover for Chosen, as well as an excerpt for fans who wonder what’s become of Nina since Book 1! Time to feast your eyes:

The demon appears out of nowhere. Claws and fangs fill my sight, and every instinct screams kill. My blood sings with it, my fists clench, my vision narrows. The vulnerable points on the demon’s body practically flash like neon signs.

“Foul!” Rhys shouts. “No teleportation, Tsip! You know that.” Even while playing, Rhys can’t help but be a Watcher, shouting out both advice and corrections. He’s not wearing his glasses, which makes his face look vague and undefined. Cillian passes him, mussing Rhys’s carefully parted hair into wild curls and laughing at Rhys’s frustration.

I take a deep breath, trying to clear my head of the impulse to kill this demon I invited into our home and swore to protect. “It’s just soccer,” I whisper. “It doesn’t matter. I don’t even like soccer.”

“Football, bloody American,” Cillian sings, neatly stealing the ball from me. His shorts are far shorter than the January afternoon should permit, but he seems impervious to cold. Unlike those of us who are translucently pale at this point in winter, his skin is rich and lovely. He passes to Tsip. Tsip is a vaguely opalescent pink, shimmering in the sunlight. She paints her claws fun colors when we do manicure nights and I try desperately not to miss Artemis.

I stay rooted to the ground where I’m standing. Tsip caught me off guard, but that shouldn’t matter. I like her. And the fact that I went from trying to score a goal to plotting a dozen ways to kill my opponent in a single heartbeat is frankly terrifying. I can’t get my heart under control, can’t shake the adrenaline screaming through my veins.

“Gotta take over for the Littles. I’m out.” I wave and jog from the field. No one pays me much attention. Jade is lying on the ground in front of the goal, the worst goalkeeper ever. Rhys and Cillian are body-checking each other in increasingly flirty ways. Tsip keeps shimmering and then resolidifying as she remembers the no-teleportation rule. They’re all happy to keep going without me, unaware of my internal freak-out.

I’ve deliberately kept them unaware. Things here are going so well. I’m in charge. I can’t be the problem. So none of them know how I can’t sleep at night, how my anger is hair-trigger fast, how when I do manage to sleep, my dreams are . . .

They don’t need to know and I don’t let them. Except for Doug, his bright yellow skin almost nineties Day-Glo levels in the thin winter sun. Annoying emotion-sniffing demon. He watches me from our goal, his nostrils flared. I can’t lie to him the way I can to everyone else. I shake my head preemptively. I don’t want to talk about it. Not with him. Not with anyone. There’s only one person I want to talk to about it, but Leo Silvera’s not exactly available.

I do a quick sweep of the perimeter of the castle. Leo loved me. Check the woods. Leo betrayed me. Check the locks on the outbuildings. Leo saved me. Pause and just listen and look, feeling for anything pushing against my instincts. I let Leo die.

Chosen (Slayer #2) hits bookshelves on January 7, 2020. You can preorder it now via Amazon or support your local independent bookstore via Indiebound.