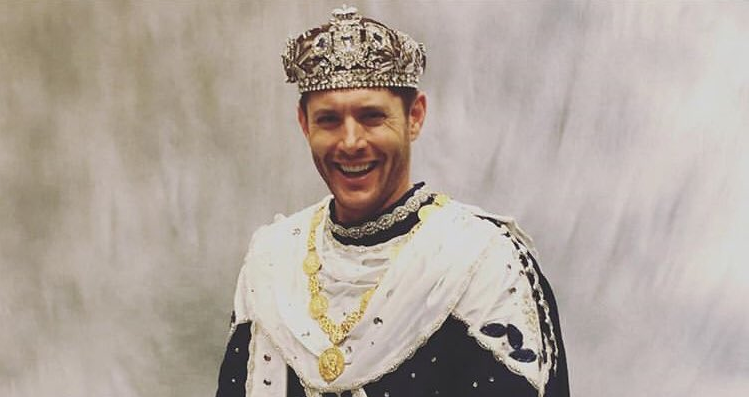 SUPERNATURAL star Jensen Ackles was treated like a king for his birthday down in New Orleans.

Jensen Ackles is officially New Orleans, Louisiana, royalty. Over a long weekend (Thursday-Sunday), he was welcomed with open arms and plenty of beads as he accepted the duties as King of Bacchus. A few days of interviews and meeting the locals led to the big Krewe of Bacchus parade on Sunday, where Jensen donned his crown.

The Man of the Weekend arrived and was greeted by quite the welcoming committee:

The King even had a band behind him:

Nola.com also got a few seconds with The King, who was both excited and nervous about the weekend:

Generally, birthdays are a time to focus on oneself. Jensen, however, spent his visiting patients and staff at Children’s Hospital New Orleans:

If you’re wondering about that swanky headgear, yes, he was crowned even before the big parade (thanks to the talent of one of the children):

Jensen’s morning involved chatting with kids and staff, taking photos, and handing out Bacchus doubloons. To respect the patients’ and hospital staff’s privacy, I won’t explicitly post any photos with them in it. However, if you’d like to check out some snapshots of Jensen with ’em, you can here.

The New Orleans Advocate learned that while Jensen has never been to Mardi Gras before, he “always wanted to go” and actress/Louisiana-native Danneel Harris-Ackles (who is also Jensen’s wife), has “always wanted to take [him].” The best way to get your husband to commit to the trip? Toss his name in the ring. The Advocate reports, “Although only Krewe of Bacchus officials know what goes into choosing Bacchus each year, Danneel and [Holly] Ollis [WB studio publicist for Supernatural] made inquiries to the Bacchus organization” without asking Jensen about it first.

The Advocate also couldn’t resist asking The Big Question: “What would Mardi Gras be like for Supernatural‘s Dean Winchester?” Jensen’s response was, of course, perfection: “Ever seen the movie The Hangover? It would probably be like all of the Hangover movies pooled into one.”

On social media, #HappyBirthdayJensenAckles posts poured in by the thousands. A few notable ones acknowledging the now-regal Supernatural star came from his co-stars Jared Padalecki and Misha Collins and, of course, Danneel.

What better way to end one’s birthday than by jamming on-stage to the song of one’s people: Kansas’ “Carry On Wayward Son”? Below, click the right arrow to see the moment local musician Mason Thomas captured:

The day before the big parade was on the quiet side. But local news station WGNO released a video showing The King’s preparation for Sunday’s main event. View the footage on their website.

Jensen (or, arguably, Dean) found a moment to address his royal subjects across the globe with a sweet Instagram post:

The first glimpse of the much-awaited royal attire came from The King:

WWL-TV asked Jensen what he was most looking forward to before he took his throne:

Kenny Lopez, reporter for WGNO, got a close-up shot of Jensen’s dazzling crown…

…and a couple more of The King overseeing his kingdom from atop his float:

Photographer and fan super inspired may have snapped the most majestic photos from the parade:

The Advocate shared a photo gallery featuring Jensen, spectators, and floats, including this capture:

NOLA.com filmed a great overview of the float:

And Dominic Massa of WWL-TV gave the fans what they wanted most: The King in all his glory:

…and interviewed him about the conclusion of his big weekend:

It’s good to be King.