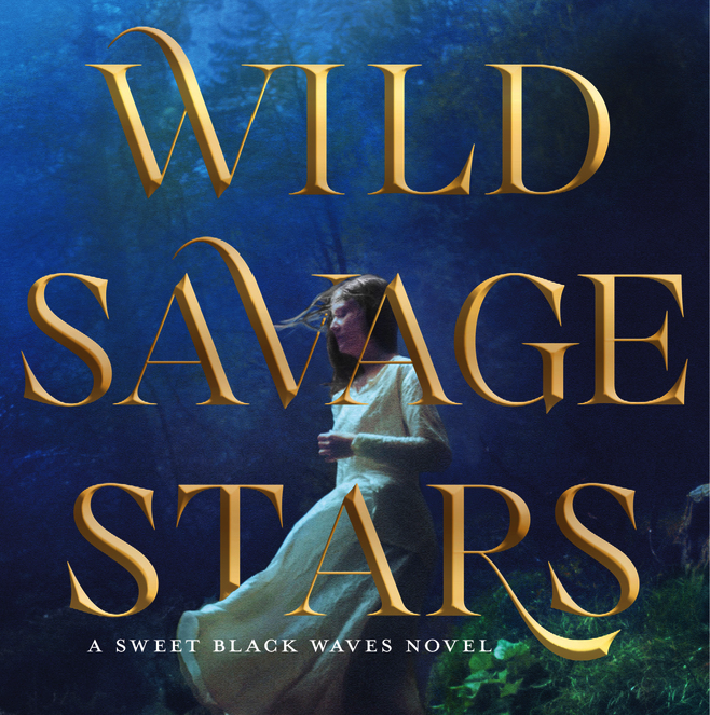 Have you ever read a novel and thought that a secondary character might make for a better main character than the actual main character? Kristina Perez had those same thoughts about Branwen from the ancient legend of Tristan and Eseult. In the Sweet Black Waves series, she set out to explore the tale from the perspective of Eseult’s closest confidante and Tristan’s first beacon of hope, crafting an expansive world beyond the original tale full of magic and mystery along the way.

Branwen is a fascinating narrator and her heart-wrenching story will grasp at anyone’s heartstrings, refusing to let go. After the wild end to Sweet Black Waves, we had a few questions for Kristina Perez before reading the newly released sequel, Wild Savage Stars!

When did you first read Tristan and Eseult, and what resonated with you the most about Branwen as you read it?

What always intrigued me about Branwen in the different medieval versions of the legend is that it’s her fault that Tristan and Eseult fall in love in the first place. She makes a grave mistake that endangers two kingdoms and impacts countless lives, but we never really get to hear how she feels about it. She spends the rest of the legend trying to protect the lovers and maintain the peace, with some horrific personal consequences, and yet she is relegated to a fairly minor role. I wanted to give Branwen a voice and explore how we can carry on and grow after making a catastrophic error.

How have the events of SWEET BLACK WAVES changed Branwen in the sequel?

At the beginning of WILD SAVAGE STARS, Branwen is in a dark place and reeling from the betrayals of the first book. She has lost her first love and her best friend. All she has left is her mission: to secure the peace between Iveriu and Kernyv, and she will do whatever it takes.

We know you can’t say too much, but after that jaw-dropping ending to book one, how are the character relationships fairing this time around?

Branwen isn’t someone who likes to admit weakness or to dwell on her own pain, which means that she has a tendency to push people away when they’ve hurt her or when she’s angry with them. Which means that at the beginning of the sequel she is putting distance between herself and all of the most important people in her life. However, she’s about to meet lots of new characters and the relationships she develops with them may be unexpected…

There’s also a new nation in play as the characters move to Kernyv. Can you tell us what readers can expect from the fresh setting?

Kernyv is located on the southwest peninsula of the island of Albion. In terms of its topography, there are impressive cliffs, rough seas, and lonely moors. Branwen feels it to be both foreign and familiar at the same time. Some of the Kernyveu follow the Old Ways, as does Branwen, but there is also a New Religion––the Cult of the Horned One––that is gaining power in Kernyv and which does not allow women to take part in its Mysteries. The changing status of women in Kernyv is going to provide a new challenge to Branwen as she tries to maintain the peace. Readers will also learn that the court of King Marc at Monwiku operates somewhat differently than Branwen is used to in Iveriu and she will have to keep all of her wits about her.

What are some songs that you associate with WILD SAVAGE STARS– whether it be because you listened to them while writing or because they remind you of the story?

Funny you should ask because I do, in fact, have a WILD SAVAGE STARS playlist on my computer that I listened to while writing. Some of the most played tracks are Apologize by Timbaland (featuring OneRepublic), 1000 Oceans by Tori Amos, and Easy as Life from the Original Broadway Cast Recording of Aida.

Who are some of your favorite characters in literature who, much like Branwen, deserve more credit than they get?

Great question! I wrote my PhD thesis on Morgan la Fey and I totally think she should be ruling Camelot. Likewise, Merlin deserved for the Lady of Lake to enchant him beneath that rock. Wide Sargasso Sea by Jean Rhys tells the story of Mrs. Rochester from Jane Eyre and it’s one of the most lyrical, haunting, and heartbreaking novels I’ve ever read. I’d also love to see a story from the perspective of Mr. Rochester’s ward, Adèle, or a prequel to Great Expectations from the point of view of Miss Havisham.

I’m a total plotter so I normally have an extensive chapter-by-chapter outline written (which can even include snippets of dialogue) before I sit down to start the first draft. I also have lots of mood boards on my computer for characters and locations. For the writing itself, I normally have strong coffee within reach, purple pens because I write all of my first drafts by hand, and extensive playlists!

Thanks for chatting with us, Kristina!

Wild Savage Stars (Sweet Black Waves #2) is out now. You can snag a copy via Amazon or support your local independent bookstore via Indiebound!

Branwen has a secret powerful enough to destroy two kingdoms.

Her ancient magic led to a terrible betrayal by both her best friend, the princess Essy, and her first love, Tristan. Now this same magic is changing Branwen. Adrift in a rival court, Branwen must hide the truth from the enemy king by protecting the lovers who broke her heart—and finds herself considering a darker path.

Not everyone wants the alliance with Branwen’s kingdom to succeed—peace is balanced on a knife’s edge, and her only chance may be to embrace the darkness within…