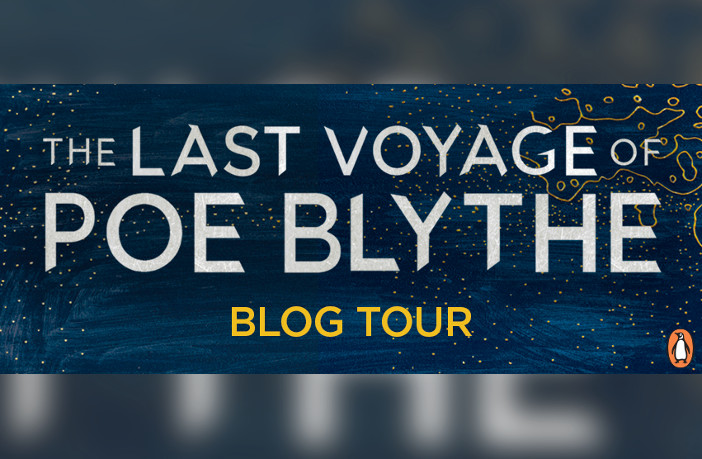 You may remember our blog tour playlist for Ally Condie‘s The Last Voyage of Poe Blythe blog tour from a couple weeks ago, but there’s even more amazing blog tour goodness to be had!

Thanks to Penguin Teen, we have a huge excerpt from the beginning of the novel for you to devour. Take a look!

Call tells me he sees a star and that makes me laugh.
“I do.” His voice is serious, his mouth against my ear.
I tip my head up. He’s right. It hangs low on the horizon. “That makes six,” I say.
“Seven,” he says. “That was a star we saw the first night on the river.”
“It wasn’t.” We’ve been arguing about this for weeks, ever since we left the Outpost behind and boarded the dredge to go upriver.
He laughs softly before he starts kissing me again.
Up on the deck, it’s easier to hear past the sounds made by our hungry metal ship. But it’s still impossible to completely ignore the constant throb and grate of the dredge as it moves along the river in search of gold, taking in rocks and stones, grinding them out. It tears up the rivers and leaves refuse and silt behind, ruins valleys, adds a smear of smoke to the sky.
“All of this, because the Admiral has a taste for gold,” I say.
“I have a taste for you,” Call tells me. I laugh because it’s such a stupid thing to say, even though it’s true, and I feel him smile.
“It makes no sense,” I say. “What good is all this gold?” We all know that the Admiral wants to help the Outpost thrive. He thinks that getting more gold can help us do that, but I’m not entirely sure why. We’ve mined enough to last us for a while, and there’s not really anyone to trade with anymore. We need so many other things. Cleaner air, more water, better medicine, ways to rehabilitate the land. All gold does is gild the time until we die.
“Who cares?” Call says. “If the Admiral didn’t want it, we’d never get to be out here.”
Call says things like this, but I’ve seen the expression on his face as he looks back at the devastation we leave behind. Churned-up riverbed, life choked to death so we can raise the gold.
Even though it shivers me to think of the ruin we’re causing, I may as well count the stars while I can. Already, in two weeks out on the river, I’ve seen more than most people back at the Outpost will in a lifetime.
“It was a good idea to come here,” Call whispers. “Admit it.”
“A good idea,” I say, teasing. “A good idea for us to spend our days in the belly of a noisy old ship loud enough to make us deaf. A good idea to spend our nights up here standing guard and ruining our eyes looking for things in the dark.”
“A very good idea,” he says.
Call had overheard some of the machinists in the scrap yard where we work talking about the dredge voyages. “It’s not an ideal posting,” the machinists told Call. “It’s dangerous and you have to leave the Outpost.” To Call, those sounded like promises instead of drawbacks.
“It’s the only way you’re going to see the world, Poe,” he said to me. “The only way you’re going to shake the dust of the Outpost from your feet.”
And we both knew that signing on to the dredge was a way for us to be together, without settling down and having babies and working all day every day in the same places, doing the same things.
And then there’s the biggest secret, the best dream of all.
We’re going to escape.
At the turnaround point, we’re going to leave. Run. Be free.
I have imagined it all. Blue lakes. Forest smell. The sound of something else alive in the woods, that isn’t human and doesn’t care that we are. We might not last long in the wilderness, but who knows. There’s a chance we could survive.
I would rather be torn apart by something than wait for nothing. And it doesn’t do any good to worry about what might happen later.
Instead, I think about now. I like now. A kiss on the top of the dredge under a smeary star sky with Call’s hands touching me.
“Should we invite any of the crew to come with us when we go?” Call asks.
We’ve had this discussion before, too.
“No,” I say. “Just us.”
Call sighs in my ear, metal aches and scrapes against stone, the trammel inside the ship turns the rocks and sifts out the gold, water sluices against rock and metal.
And then the bell from the mining deck.
I swear because I know what it means. They need help with the dredge’s main motor, the one that powers all the systems on the ship.
“Go on,” Call says. “Then you can come back up here.”
It’s sliding past dusk and straight into night.
“Be careful while I’m gone,” I say. “Watch out for the raiders.”
“I do a better job watching when you’re not here,” he says, and even in the dim light I can see the twist of his smile.
“That’s true,” I say. “I won’t come up again.” I’m not joking. Perhaps we’ve been too giddy with freedom, with being outside.
“Poe,” Call says. “It’s all right. We haven’t seen a single raider on this river.”
Maybe they’re dying off. Everyone knew it would happen eventually.
The Outpost is the only place you can last. The only place with dependable medicine and food and the protection of the Admiral and his militia. You give up some of your freedom for it, but most feel it’s an easy trade.
Call touches my hand in the dark as I leave.

Out on the shore, the dredge is an enormous deep shape against the night sky, and then it’s the sun, exploding.
“They’ve blown it up.” The captain’s voice shakes.
Heat washes over us. A few singed shards of metal come down into the water and glint-glance off the rocks we tore up earlier.
The wind shifts, and I see a whole spread of stars beyond the miry, polluted air. They vanish again behind the smoke from the burning ship.
Call is dead.
The raiders made Call nothing. Call who was everything.
I make them a promise, as their smoke and fire blot out the stars.
I will make you nothing too.

The Last Voyage of Poe Blythe is currently available wherever books are sold– Snag a copy via Amazon or support your local independent bookstore via Indiebound!

Who do you become when you have nothing left to lose?

There is something Poe Blythe, the seventeen-year-old captain of the Outpost’s last mining ship, wants far more than the gold they tear from the Serpentine River.

Poe has vowed to annihilate the river raiders who robbed her of everything two years ago. But as she navigates the treacherous waters of the Serpentine and realizes there might be a traitor among her crew, she must also reckon with who she has become, who she wants to be, and the ways love can change and shape you. Even—and especially—when you think all is lost.

Book Review: THE LAST VOYAGE OF POE BLYTHE Is Ally Condie’s Best Yet