Learn All About HARRY POTTER Wands in New Book

Now’s you can learn all about HARRY POTTER wandlore in a new book!

We all know the wand chooses the wizard, but have you ever wondered about how wands really work? How that connection between wand and wizard forms? Well, wonder no longer, because Insight Editions is releasing a book that details the nature of every main Harry Potter character’s relationship with their wand.

Harry Potter: The Wand Collection takes a look at all the important wands used in the Harry Potter films, discussing what each wand is made up of and what that means. We all know that the contents of a wand can have major repercussions, as with Harry and Voldemort, so this should be a really interesting look into both the wands and the characters that wield them.

Harry Potter: The Wand Collection is due on shelves on November 14th. Check out the official description below, and you can pre-order here.

In the Harry Potter films, each wand is as unique as the witch or wizard who wields it. Whether talon-shaped like Bellatrix Lestrange’s or simple and elegant like Hermione Granger’s, each wand was designed and crafted by the filmmakers to be a reflection of its owner’s identity.

Harry Potter: The Wand Collection is an in-depth visual guide to the many magical characters and wands of the Harry Potter films. Detailed profiles of each wand feature stunning new photography, wand statistics, insights from cast and crew, and other filmmaking secrets from the Warner Bros. archive.

This collectible volume is an ideal resource both for wand-wielding fans looking to learn the history behind these beloved items and for a new generation of children eager to start their journey into the wizarding world. 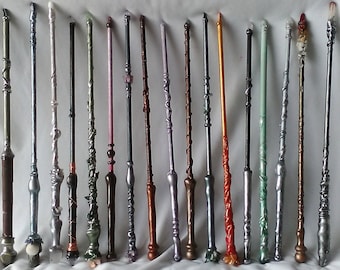