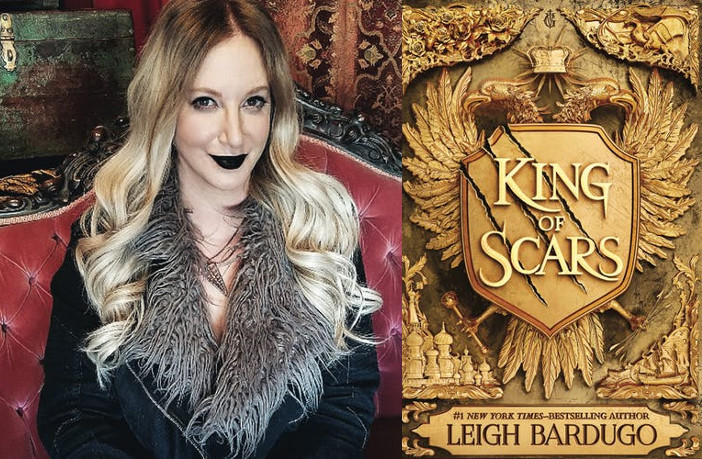 In Leigh Bardugo’s upcoming book, KING OF SCARS, we get to read more about our favorite pirate privateer, Nikolai Lantsov, King of Ravka, in this addition to The Grishaverse.

In an interview with Goodreads, Shadow and Bone and Six of Crows author Leigh Bardugo talks about returning to the Grishaverse, what readers can expect to learn about Nikolai Lantsov, and possible familiar faces we’ll “see” in King of Scars.

Goodreads: So many fans are excited about Nikolai Lantsov getting his own story. Why did you decide to return to this particular character?

Leigh Bardugo: When I first outlined the Shadow and Bone trilogy, I planned to kill off Nikolai in the second book. Alina was going to be framed for the murder. Lots of drama. Our heroine flees into the night.

Then Nikolai showed up on the page, and I had to scrap that entire plot direction because his character was just too much fun to write. From then on I knew I wanted to give him his own story, and I deliberately left doors open at the end of Ruin and Rising to make that possible.

GR: Can you give us a hint as to what the title King of Scars alludes to?

LB: More than a hint. At the end of Ruin and Rising, the Ravkan people are aware that Nikolai endured some kind of captivity and torture during the war, and they’ve taken to calling him “King of Scars” because of the marks he bears. But they have no idea what he really went through. And at the start of the story, even Nikolai and his closest advisers don’t understand the implications of what the Darkling’s actions may have cost the king.

GR: What are the biggest challenges facing Nikolai in your new book?

LB: Nikolai is a young king with an empty war chest trying to rule a country with enemies on all sides. He needs money and he needs allies. But the demon inside him has other ideas. Nikolai is literally at war with himself.

GR: Readers are also excited to return to Ravka! How has it changed since the end of the Shadow and Bone trilogy?

LB: I think the biggest change is the impact of Alina’s legacy. The girl is gone, but the Saint lives on and we see her influence everywhere—even beyond Ravka’s borders.

GR: Will we see any cameos from other beloved Grishaverse characters?

LB: For Six of Crows fans, this is a continuation of Nina’s story as she tries to make peace with the events at the end of Crooked Kingdom and takes on a new mission for the Ravkan crown. If you read the original trilogy, Genya, David, Tolya, Tamar, and Zoya play major roles in this story.

To read the full interview, check it out on Goodreads.

King of Scars lands onto bookshelves January 29th, and you can pre-order your copy through Indiebound or Amazon.