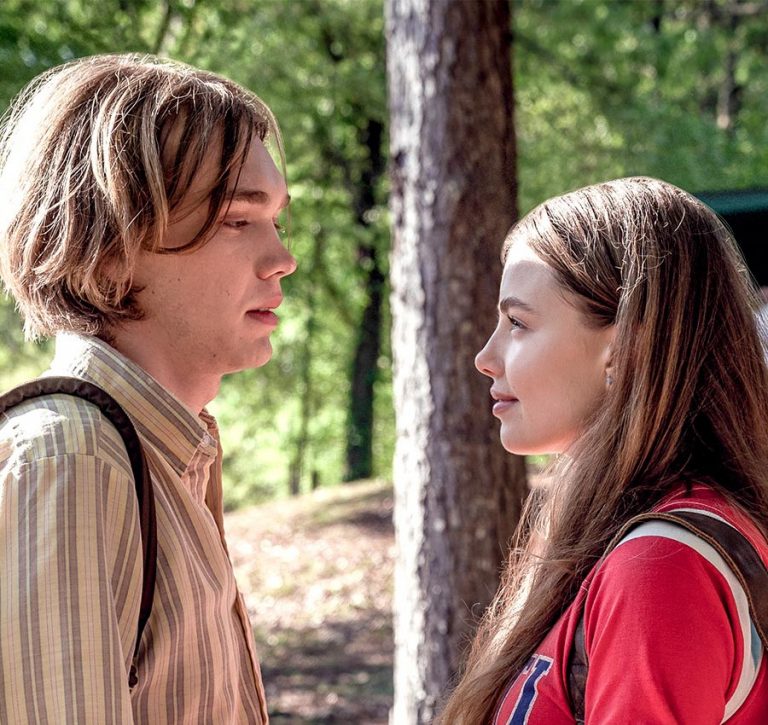 After fifteen years of high hopes and false starts, Looking For Alaska has finally come to the screen! A miniseries in its final form, this eight-part adaptation has plenty of time to flesh out the characters and add in a little extra. And oh, does it take advantage of that!

Let’s take a deep dive into the ways Pudge, Alaska, The Colonel, Takumi, Lara, and others do things a little differently in the show versus the novel John Green first published in 2005!

Let’s start with the most obvious and crucial part of it all! The 2005 novel Looking For Alaska is told from the perspective of one character and one character alone: Miles “Pudge” Halter. While the show still finds its center in Pudge, it expands to include multiple perspectives including Alaska, The Colonel, Takumi, and even Mr. Starnes aka “The Eagle.” In the books, Pudge has a habit of simplifying others, particularly Alaska. With expanded perspectives, Alaska becomes less of a mystery and more of a conflicted, struggling teen. The Colonel becomes less of a hothead and more of a young black man fighting for the place in society he knows he’s earned. The Eagle becomes less of an overzealous weirdo desperate to catch kids breaking the rules and more of an authority figure who genuinely wants what’s best for the children he’s responsible for. It’s enlightening!

In the book, Marya and Paul were expelled the year prior to Pudge starting at Culver Creek. Pudge never meets them, and they never personally accuse Alaska of being “the rat” that got them expelled.

The majority of episode 2 has no basis in the book. There is no debutante ball, which means The Colonel never saves up to buy a suit, the Weekday Warriors never destroy it, and the crew doesn’t unleash hell at the cotillion in retaliation. It’s definitely a friendship-solidifying moment for the group, as well as an exploration of rich, white southern culture and the racism surrounding it as The Colonel is denied the right to escort his girlfriend, so it’s a good addition.

Alaska and Jake’s breakup, plus Fiona

A major part of understanding Alaska’s perspective comes from her grappling with her relationship with Jake. In episode 3, Alaska spends much of the episode at college with Jake, during which time she meets his good friend and her own foil, Fiona. Alaska decides Jake deserves a girl who’s more stable and successful like Fiona, dumps him, and stops answering his calls until the fateful night she dies. This never happens in the book! Alaska and Jake’s relationship is never seen as anything other than happy. When Alaska makes out with Pudge, she’s still dating Jake and Pudge is still dating Lara. When Jake calls, it’s a simple “happy anniversary” call. Really, both scenarios complicate Alaska (not to mention Pudge’s feelings for her,) but in different ways.

As for Fiona? She doesn’t exist in the book at all.

Dr. Hyde is just as wise and thoughtful in the book as he is on screen, but he doesn’t offer much perspective to his students outside class. The on-screen version not only spends some quality time with Alaska, Miles, and Chip, but also has his own backstory: He lost his partner during the AIDS epidemic and has been focusing on religious theory– including what awaits us after death– ever since.

Perhaps the biggest ongoing difference from the book is the way Alaska is ostracized after everyone finds out she’s the “rat” who told on Marya and Paul. In the book, only Takumi and The Colonel find out about it and of the two, only The Colonel really cares. Rather than Alaska being shunned by the entire school culture, The Colonel gets very angry, but the group moves on pretty quickly.

The Final “Before” Prank and Its Consequences

The group’s “big prank” wasn’t quite as big in the books. For starters, Pudge and Lara were in on it from the start. Secondly, the book prank involved the five writing fake progess reports home to the Weekday Warriors’ parents to highlight their “failing grades”. They also add blue hair dye to the Weekday Warriors’ shampoo. The hair dye prank was pulled in an earlier episode of the show and instead, the group sends fake college applications to Duke University for the Weekday Warriors. There are virtually no consequences for the book prank, but in the show, the prank is quickly traced back to The Colonel and he’s (almost) expelled.

While Alaska’s dream of owning a kickass feminist bookstore that sells Pudge’s debut novel is a fun one, it’s not something discussed in the books. More than anything, it seems to be a nod to author John Green, who said the novel is a personal (though not autobiographical) one for him. Also, the title of Miles’ fake novel is Famous Last Words— the title Green originally thought up for the book.

For the sake of pacing, Alaska’s death happens just before winter break instead of just after– about a month earlier than it does in the book (December 12th versus January 10th.) That means the characters know each other for even less time when everything goes down, but it also makes better use of the winter break the students spend away from Culver Creek.

The Colonel and Mr. Young

The novel only features one interaction with Alaska’s father at the funeral, in which he discusses the closed casket with Pudge and The Colonel. However, the show expands upon it with a scene in which The Colonel’s temper flares up and he attacks Mr. Young for the poor treatment and unfair blame that made Alaska avoid her home. In turn, Mr. Young admits fault and regret, breaking down in front of everyone.

Lara deserves so much better than Pudge given his obsession with Alaska as they dated. And she actually gets something better in the show: A budding relationship with Takumi, perhaps the only other level-headed person at Culver Creek. We never see Lara and Pudge addressing the failure of their relationship like they did in the book, but it’s nice to see her getting a little happiness with someone who truly cares about her.

Thankfully, Looking For Alaska‘s changes enhance the story rather than deter it, so we were able to enjoy the series even more!

Looking For Alaska is available now on Hulu.