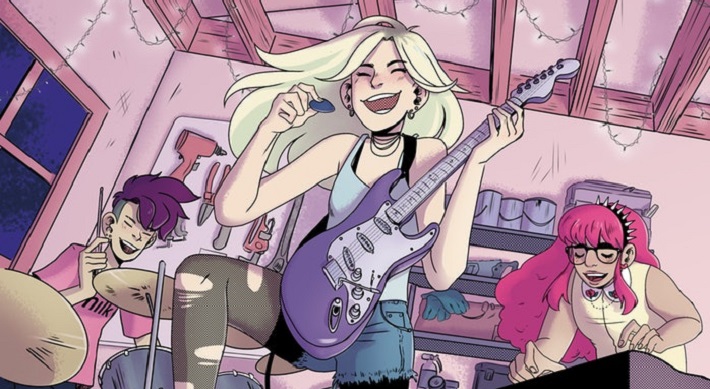 After the success of the young adult prose DC Icons series, DC Comics in turning its sights toward graphic novels for middle grade audiences.

For its take on a young Dinah Laurel Lance aka Black Canary, DC Zoom tapped The Princess Diaries author Meg Cabot and artist Cara McGee to tell a story of a young girl finding her power and voice, literally AND figuratively, in Black Canary: Ignite.

Bustle has the first look at the upcoming graphic novel, including the cover and some insight from Cabot.

Black Canary: Ignite follows 13-year-old Dinah Lance through her day-to-day life as an awkward teenager and garage-band rocker. While she’s trying to convince her father to let her join the Gotham City Junior Police Academy, the boisterous and fun-loving Dinah starts getting in trouble for things she didn’t do, like shattering glass and bowling over her classmates in freak accidents. Her friends think she has telekinesis, but Dinah’s about to find her voice — literally.

According to Cabot, Dinah’s supersonic voice stands for a lot more:

“I was always told as a kid that I was much too loud and needed to be quiet. Every time a woman speaks up they’re just totally bombarded with negative messaging, and I think that’s so important that we tell girls it’s okay to be loud and speak out.”

Check out three pages from the graphic novel:

Black Canary: Ignite hits shelves on November 5, 2019. You can preorder it now via Amazon.

DC also has a young adult graphic novel imprint, DC Ink, under which they’ve already released Harley Quinn: Breaking Glass and Supergirl: Being Super by Mariko Tamaki and Steve Pugh, as well as Mera: Tidebreaker by Danielle Paige and Steven Byrne. The next release is Kami Garcia and Gabriel Picolo‘s Teen Titans: Raven, due out on July 2nd.