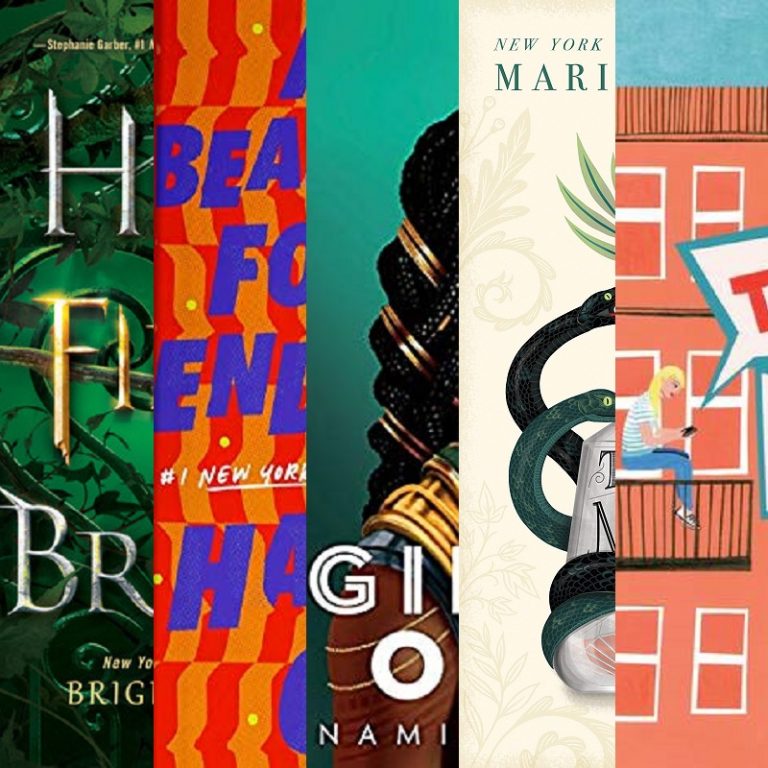 This year is rapidly coming to a close and then we’re on to 2020. But don’t fret, there are many amazing things coming our way in the new year– like brand new books!

We asked our staff to talk about the books we’re most excited about getting our hands on in 2020 and why. From fantasies to contemporaries and everything in between, they really delivered! Take a look at the books we’ll be drooling over next year below.

A HEART SO FIERCE AND BROKEN by Brigid Kemmerer

A Curse So Dark and Lonely had some fairy tale inspiration, but it’s not a basic retelling but any means. It was multidimensional, dark, and enrapturing with rich worldbuilding and whip-smart characters. So naturally, the sequel practically has us salivating– especially after the massive reveal at the end of Book 1. We can’t wait to revisit Rhen, Harper, Grey and the land of Emberfall for another adventure!

ONE OF US IS NEXT by Karen M. McManus

I was blown away by McManus’s debut novel, One of Us is Lying and I’ve been dying for a sequel ever since. I am so excited to find out what’s been happening at Bayview since the truths were revealed in the first book. This one seems to follow a new group of kids, but it’s in the same essense of the first book. And while Two Can Keep a Secret, which came out in between, as also a fascinating, twisty mystery, nothing can compare to a return to the story that pulled us in. I just hope we get a look at the Bayview four in person, and not just in name. But I will definitely be picking this one up the moment I can.

There is absolutely nothing wrong with a good, adorable contemporary romance to begin the new year, and that’s what you’ll be getting if you pick up this book. Set in modern day, where tweet wars are a thing, and tweets by popular fast food joints are some of the best things to read on the social app, this story introduces us to two young, ambitious and hard-working teens – Emma, who’s in charge of her family’s fast food chain’s Twitter account, and Jack, who’s expected to take over his family’s deli. When Emma’s chain steals a grilled cheese recipe used by Jack’s deli, a Tweet war ensues, bringing the two against each other, all the while confiding in each other anonymously through a messaging app that Jack created. We’re not sure if it’s an updated take on the 1937 play Parfumerie (or its most recent adaptation, the 1998 movie You’ve Got Mail,) but either way, we’re totally into it!

YES NO MAYBE SO by Becky Albertalli and Aisha Saaed

Anything written by Becky Albertalli is guaranteed to be amazing, so we are thrilled to read the collab she’s written with Aisha Saeed.  We don’t know much about the book, as we prefer to go into books blind, but we do know that Albertalli’s character is Jewish, Saeed’s character is Muslim, and they’re hitting the political campaign trail together to change their community, so we’re  incredibly excited to see that dynamic play out. This is in contention to be the contemporary of the year and I can’t wait to get my hands on it.

CHAIN OF GOLD by Cassandra Clare

Is it just me, or does it feel like Cassandra Clare has been teasing The Last Hours series for eleventy billion years?! Fans have been aching for this next generation follow-up since the end of The Infernal Devices. Cassandra Clare has included the characters in novellas, shared snippets, and featured them in art often enough that we’re already attached to them. With each new Shadowhunters series set in a new era, we feel like we’re unlocking a deeper secret of the overall universe. Plus, we know what to expect from Clare’s writing in general: Spunky characters, wild twists, heart-wrenching romance, and plenty of action, to boot!

At this point, it’s practically a cornerstone of my personality that I love Sarah J. Maas. So I am so crazy excited for the release of her new book, which marks the start of her new series, Crescent City. Sarah J. Maas has such a deft skill with world building and lyrical prose, and I cannot wait to see what new kind of magical world and unforgettable characters she’ll create in this book. Crescent City takes place in a modern magical world, so there will be cars and cell phones and other modern technology to add to the fun. No one talk to me on March 3rd, because I’m going to be reading this book all day.

THE MIDNIGHT LIE by Marie Rutkoski

Marie Rutkoski has already proven herself to be a creative crafter of high fantasy worlds who can pull on your heartstrings all the while, particularly with The Winner’s Curse series. The Midnight Lie is the first in a duology set in the same world as The Winner’s Curse. It’s going to introduce new characters, magic, and a queer relationship that’s probably going to break our hearts and then save us with its beauty, if the author’s previous writing is any indication. We’re absolutely ready to dive back into this world, discover fresh secrets, and feel ALL THE THINGS as we go!

THE LUCKY ONES by Liz Lawson

This is the debut book by Liz Lawson, and she tackles the very dark subject of a school shooting as experienced through the eyes of two characters who have to deal with the emotional aftermath of the tragedy. When the two meet, we get to see if they can find hope in surviving after so much loss. The fact that it’s about something that is so sadly real in our current times could be a deterrent, but we really feel this is something that readers will want to get their hands on, either to understand or to find a way to cope with tragedy, and that’s something that we all have to deal with in one form or another.

TIME OF OUR LIVES by Emily Wibberly and Austin Siegemund-Broka

There’s just something about a decent and well-written romance that grabs your attention and doesn’t let go until you’re done. This writing duo, who also happen to be an actual couple, caught my attention with their 2019 novel If I’m Being Honest. I thoroughly enjoyed it. The characters weren’t pretentious and they felt pretty honest as teens. An element of Shakespeare was added in in some form or another in their two previous books, and though I’m not sure if there’s going to be such a thing in this one, I’m looking forward to it nonetheless.

THE BALLAD OF SONGBIRDS AND SNAKES by Suzanne Collins

SURPRISE! Just when we thought we were done with The Hunger Games, Suzanne Collins announced the prequel! The story is supposed to take place on the morning of the 10th Hunger Games and I’m so incredibly hyped to see what Panem was like back then. The rebellion is still fresh and I doubt people were as experienced in gaining sponsors and killing. Reading this will for sure be a shot of nostalgia to the good old days. This is for sure my most anticipated release of 2020 thus far!

THE GILDED ONES by Namina Forna

A West African-inspired fantasy in the vein of Children of Blood and Bone, Namina Forna’s debut is making huge waves. It tells the story of Deka, a teen who is deemed impure by her society. Deka expects disastrous consequences, but instead she’s approached by a mysterious woman who gives her a chance to leave her village and join a legendary female army full of near-immortals. We’re all for POC tales, kickass women, and strong fantasy elements, so we can’t wait!

THE DAMNED by Renee Ahdieh

It’s official: Renee Ahdieh has brought vampires back to YA, in the dark, sexy style of Anne Rice. In The Beautiful, the chemistry between Celine and Bastien was off the charts with an enemies-to-lovers take that’s to die for, and the supporting characters were super strong. Add in the fascinating vibe of late 19th century New Orleans and there’s a perfect, simmering magic to this tale. After a wild ending, we can’t wait to see where things pick back up and how the danger and romance develops in this one!

The sequel to Hank Green’s 2018 fantastic and lovely debut, An Absolutely Remarkable Thing, A Beautifully Foolish Endeavor continues the story of April May and her friends as they navigate the complicated world of alien statues and the complications of the social internet. I’ve been waiting for this book since I finished An Absolutely Remarkable Thing, and could not be more eager for its impending release. Hank Green has such a unique way of writing that is both extremely captivating and impossibly profound. I can’t remember a book I’ve read recently that’s been more thought-provoking and exciting (those plot-twists!) than AART. I’m sure A Beautifully Foolish Endeavor will be just as good!

Book two of The Eldest Curses continues the Shadowhunter Chronicles side story of Magnus and Alec’s relationship and the powerful magical books that somehow involve them. If all goes as planned, this book will take place in 2010, soon after Magnus and Alec have adopted Max, and apparently we will get answers to some unanswered questions from previous Shadowhunters books, so that’s always nice to look forward to. We’ll apparently also get to see some familiar faces from both The Mortal Instruments and The Infernal Devices books, so I’m definitely looking forward to that.

The final book of the Origin trilogy is coming and if you’ve been following the Lux and the Origin series, you’re probably looking forward to this book as much as us. When we first saw Luc in the Lux series, we thought, yeah, smart kid, but what a brat! Well, things have changed and he stole our hearts with his snark and cutesy nicknames, and yes, even his pet rock. Who would’ve thought that receiving a pet rock from a hot guy would be so adorable. And then there’s Evie and all that we’re learning about her and her past and her ability to do what she does, including having Luc fall head over heels in love with you. We’re looking forward to all the amazingness that humans, aliens, and alien-human hybrids are all about and we can’t wait to see how it’ll all turn out in the end.