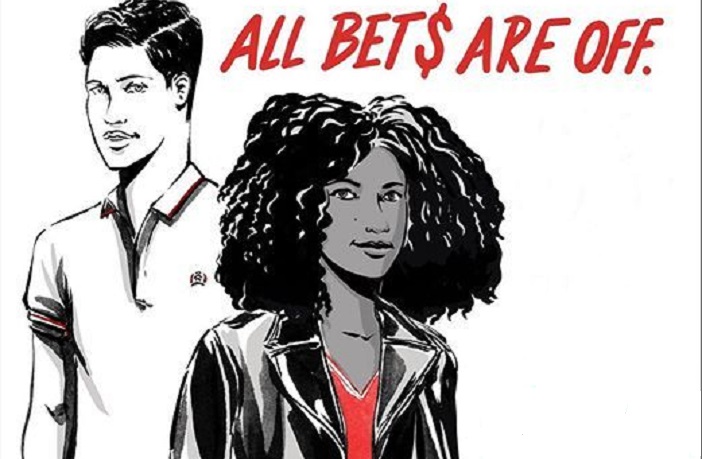 Back in November 2018, we interviewed Nic Stone at YALLfest and she gave us the early scoop on her next book– So early, in fact, that she wasn’t even sure she was allowed to say anything. The book, she revealed, was called Jackpot.

Now, Jackpot is well on its way to publication, complete with a description,a fall release date, and a great cover design!

The novel follows Rico, a poor student working part-time at a local gas station trying to support her little brother when she sells a winning lottery ticket. When the ticket goes unclaimed, she teams up with wealthy classmate Zan to find the winner. Revealed by the team at Project LIT, the cover features Rico and Zan in black, white, and red with the tagline “All bet$ are off.”

Meet Rico: high school senior and afternoon-shift cashier at the Gas ‘n’ Go, who after school and work races home to take care of her younger brother. Every. Single. Day. When Rico sells a jackpot-winning lotto ticket, she thinks maybe her luck will finally change, but only if she–with some assistance from her popular and wildly rich classmate Zan–can find the ticket holder who hasn’t claimed the prize. But what happens when have and have-nots collide? Will this investigative duo unite…or divide?

Nic Stone, the New York Times bestselling author of Dear Martin and Odd One Out, creates two unforgettable characters in one hard-hitting story about class, money–both too little and too much–and how you make your own luck in the world.

Jackpot is hitting shelves on October 15, 2019. You can preorder it now via Amazon or support your local independent bookstore via Indiebound!