OPINION: Why OUTLANDER’s Season 4 Finale Was Its Biggest Disappointment Yet 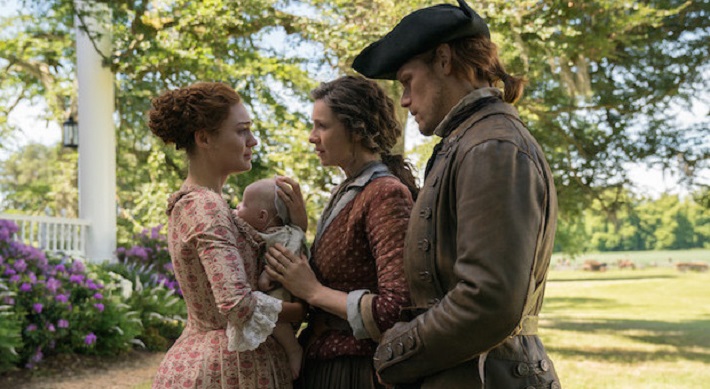 When you co-own a site that focuses in on book-to-movie adaptations, you can’t be super picky. I always joke that I “like to like things” because on the whole, adaptations make me happy so long as they resemble the book they’re based on. From genuinely good to “so bad it’s good”, I generally think these things are meant to be enjoyed.

I’ve watched Outlander since day one and four full seasons later, I’m still invested. I think it’s genuinely quite good! That’s not to say the show is perfect– It’s not. It sometimes leaves out great moments from the books, it adds in some superfluous nonsense for the sake of drama, and the writers don’t seem interested in fixing some of the book series’ major flaws (less rape and a softer TV version of Roger that’s not such a selfish misogynist would have both been great!) I’m still on board all the same. And yet…

The Season 4 finale of Outlander was the most frustrating episode of the show to date.

In what should have been the most powerful, emotionally-driven episode of the season, things ended with a whimper instead of a bang. What started off strong with the failed rescue attempt and Young Ian taking Roger’s place among the Mohawk quickly fizzled as in the last thirty minutes or so, the writers seem to realize that they didn’t actually give themselves enough time to finish out the story properly.

In its fourth season evolution, Outlander is about more than Jamie and Claire– It’s about the Fraser family. With the exception of Ian’s big moment, the season finale seemed to forget that we need an emotional connection to these characters. We need to be invested in their development. The best it does is manage to get Jamie, Claire, Brianna, Roger, and baby Jem in the same vicinity.

The final minutes of the season are a cavalcade of important family moments squandered: Claire and Jamie are not there for Brianna during her baby’s birth. Brianna talks of forgiveness to Murtagh, but is never seen actually reconciling with Jamie. We never see Jamie and Claire enjoying being grandparents together. Roger never meets the baby. Roger and Jamie never take a moment to come to terms with each other. We’re not told the baby’s name (even though book readers know it). The stilted, awkward days of Brianna and Roger not being so sure about their relationship before coming back to each other are swept aside. The Gathering and the famous “Tell them the MacKenzies are here” line that I love and that was SET UP IN A EARLIER EPISODE were not even approached. Almost every major emotional note regarding the Fraser family unit was missed.

Part of this is an overall Season 4 pacing issue. There are only 13 episodes in a season. We spend an entire episode with Willie and an entire episode with Laoghaire. There are drawn out dramatic moments making peace with the Native Americans of the region. There are at least two plotlines thrown in just to remind us that Claire is a surgeon. The return of Murtagh (which I loved overall) brought along a sizable regulators subplot that isn’t present in the books yet. We spend a huge chunk of the penultimate episode with a priest who dies 40 minutes later.

These things would all be fine if the rest of the plot moved with it, but it doesn’t. Brianna and Roger initially falling in love is more implied than seen. Jamie and Claire are rarely seen taking issues on together. Fergus and Marsali make the most of the time they have on screen, but it’s very little time. What it largely boils down to, of course, is the finale trying to squish what should have been two episodes of material into a single hour of television.

It was a wholly unsatisfying ending and one that gives the characters very little credit. After an entire season of reminding us how deeply flawed these characters can be, didn’t we deserve a few moments to see the good in all of them as they came together?

The finale really throws things off kilter, but the show can redeem itself in some aspects in Season 5. The Fiery Cross aka Book 5 is not exactly Gabaldon’s strongest contribution to the Outlander series and frankly, I wouldn’t mind that plot was cut down to show us more of the struggles and triumphs of a family gone through hell and back that’s still working itself out. We’ll never get a redo on Jem’s birth scene, but if the next season picks up right where the fourth left off, we can still get the gut-punch of Roger kneeling before the baby and declaring him his son, no matter what. Jamie and Brianna can have that discussion that so needed to have, even if belated. Roger and Bree can still experience relationship insecurities in the wake of their new situation and eventually come out on the other side of it.

After a long cooling-off period between seasons, will it still pack the same emotional resonance? No, probably not. But it’s better than simply implying that everything in the Fraser family is A-okay and dancing on to the next forced moment of ~*~political intrigue~*~.

Yes, there needs to be a solid story threaded throughout any show if it means to be successful, but let’s not forget: No one cares about the story if they don’t care about the characters involved first.