Opinion: The Performances in SUPERNATURAL’S 300th Episode Were Emmy-Worthy 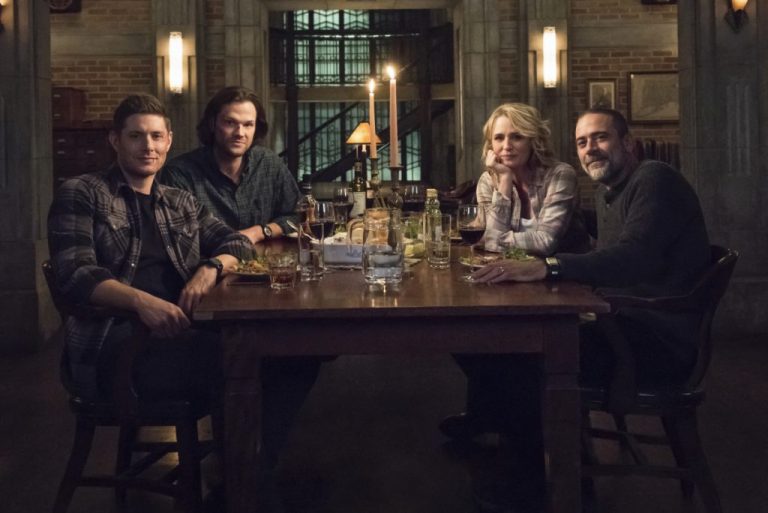 While I found some of the writing a little rocky, the acting in SUPERNATURAL’s “Lebanon” was superb.

Supernatural aired its (whopping) 300th episode last Thursday, and wow, was it a ride. It was teased back in July at San Diego Comic Con that showrunner Andrew Dabb (who was the co-writer of “Lebanon,” along with Meredith Glynn) wanted to have an episode where we got to see the Winchesters through the town’s eyes. In reality, Lebanon, Kansas’s population is less than 300 people. So, it’s quite clear that two large, stunning, suspicious, semi-threatening men in an eye-catching muscle car would be noticed by all. I was on board with Dabb’s idea from the get-go, and the plan followed through…to an extent. But the most captivating portion of the 300th episode didn’t need to exist outside of the Bunker. John Winchester had returned.

Here’s where I get picky. The writing choices.

The overall plot, I think, was pretty well handled. The episode was like a two-in-one, showcasing stories inside and outside the Bunker. However, I wondered if fleshing out each of those stories in their own episode would have made more sense. I understood the desire to make 300 “big,” and they definitely did. But as a result, maybe both storylines didn’t receive as much detail and attention as they could have.

Still, it was such fun to watch teenagers discuss the brothers, their angel friend, and their kid. We saw the bond between the boys and various locals – a liquor store owner, and a post office worker (who was amusingly sweet on Dean.) We even got a glimpse of how Sam and Dean stock their arsenal of occult items: going to pawn shops with a huge wad of cash and asking for “the Good Stuff.”

But the meat of the episode surrounded Dad. It came as no surprise that Dean’s biggest desire was not to get Michael out of his head, but to see his father again. So, the connection of John’s return and the pearl was a good fit. The scenes that needed to happen – special moments between John, Sam, Dean, and Mary – were included, and overall, the best written pieces in the episode’s puzzle. Moments in-between, however, had me going back and forth. (I’m still not quite sure what the majority of Sam and Dean’s discussion while doing the dishes accomplished.) The dialogue in the episode was my biggest disappointment. In various cases, it was as if the writers knew what they wanted to deliver, but couldn’t quite figure out how to do so. Some of the language felt stilted, like it was there for exposition and explanation rather than organic conversation (the clown incident, for example.)

Interestingly enough, one of my favorite parts of the episode overlapped both extremes of the plot. When 2003!Castiel, Angel of the Lord, and 2003!Zachariah, Hard-ass in a Suit, came down from Heaven to see who upset the timeline, I was giddy. It was a treat to see Cas back at full-power, as strong warrior. (But I will still take Humanized!Cas any day.) Plus, we got to watch the talented Kurt Fuller slip right back into character as if 10 years hadn’t passed since the last time he’d done so. I am, however, bummed that 2019!Castiel did not play a bigger role throughout the episode. We got to see him for a few seconds at the very end, but I wish he could’ve met John. My mind spins considering the discussion the two of them could’ve had. Ultimately, I do respect the decision of keeping John’s return exclusive to the biological Winchesters and am beyond grateful that Misha Collins was included in the 300th (unlike the 200th).

Nitpicking aside, the show-stopper was the acting from Jared Padalecki, Jensen Ackles, Jeffery Dean Morgan, and Samantha Smith. The sheer emotion pouring out of each of their characters at any given moment during their family reunion was palpable.

Sammy finally got closure with his father, finally got to say he was sorry and have a proper goodbye. The unfiltered onslaught of tears almost constantly hovering on his lash line kept the lump in my throat locked in place. I also couldn’t get over Sam’s near inability to look John in the eye as they tried to right their wrongs. Ouch.

Dean heard John authentically say that he was proud of him, and for a second, all seemed right with the world. John even tried to apologize for messing up the future Dean could’ve had. It was clear Dad hoped that his son would one day live a “normal” life and have a family. But Dean asserted that he had a family – his own version of a family. And it was more than enough.

Mary, who had been back from the dead for more than two years and was still spinning, almost collapsed the moment she saw John. But she recovered quickly and was in his arms and sharing a kiss with her husband in the blink of an eye. Then came the devastation of learning John had to leave. The hit was so forceful, she needed to lean against the stove in the kitchen to keep upright.

John almost never took the smile off of his face. He was completely engrossed in having his family together. Even though the dynamic was much different than he could remember – his sons now fully-grown men and his wife (technically) not being much older than the day she died – he didn’t miss a beat. All he wanted to do was share his love and express his sorrow over the regrets he had about the Winchesters’ past.

Before we knew it, it was time for the goodbye. Oh, the goodbye! I’m not sure it was physically possible to watch without crying. John tried to keep everyone’s spirits high. He rose to the role of Protector. Mary stood tall by her husband’s side, even though she felt anything but strong. Dad told his boys that he loved them and that they needed to watch out for each other. Not that Dean should look out for Sam. No, this time, the responsibility was even. Sam took the hit and was the one to destroy the pearl, but also clearly dreaded the moment with all he had. He wiped his tears away, but more replaced them instantaneously. And Dean. Oh, Dean. He was granted what his heart most desired, but it was painfully short-lived. The look in his eyes as he cried was some genius combination of a lost little boy and a ghost. Those few minutes – acting doesn’t get much better than that. So. Much. Talent.

A couple additional notes and ramblings:

There are theories flying around that believe upon 2003!John’s return to his current time, he was conscious of all that happened in that “dream” of his. He went on to make decisions he hated throughout season 1 because he was now aware of the outcome that needed to happen. Where his family was in 2019, he had to do anything to get them to that place, even if it hurt. His boys needed to save the world, and that seemingly made up for some of his actions in the follow few years. Maybe. Maybe. But the decades before – the weight he put on his kids, the life he forced them to live, the pain he caused them – I still can’t forgive that. But it was nice to view John in a positive light for a change, so thank you, “Lebanon.”

Finally, I must express with all the press the 300th episode got (even months prior to its airing), the spoilers were devastating. I did not personally seek out any of the released details, and they still found me. And from what I’ve heard, those who actively kept up with the spoilers knew just about every aspect of the episode before it premiered on The CW. I can’t help but think how much more I would’ve enjoyed watching “Lebanon” going in mostly blind. So many reveals and surprises would’ve heightened the experience beyond belief.