OUTLANDER: “If Not For Hope” Photos Show Bree In A Tight Spot 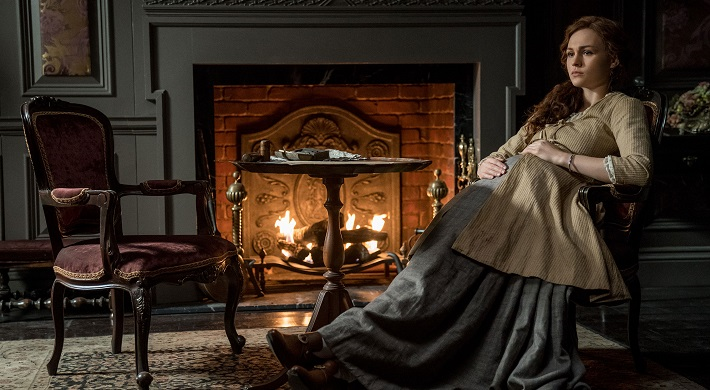 The tenth episode of Outlander left the characters and fans alike reeling as the truth of Jamie and Ian’s horrible mistake came to light and Brianna’s Fraser temper came out in full force (and rightfully so, given all she’s been through.)

The end of the episode saw the characters scattering in different directions: Jamie, Claire, and Ian to track down the Mohawk tribe and the captive Roger, Brianna to River Run to stay under the care of Aunt Jocasta, and Murtagh to Wilmington to hunt Stephen Bonnet.

It’s been a while since then. New photos from Episode 11, “If Not For Hope”, have hit the web thanks to Starz and EW. They show that months have passed as Brianna’s baby bump is in full bloom. The young mother-to-be is looking a bit sullen, probably thanks to Aunt Jocasta’s attempts to wed her off to random suitors, but she seems to find some solace in drawing. Meanwhile, the other Frasers are finding clues to seem to indicate that they’re close to the Mohawks’ settlement. But will they find Roger?

“If Not For Hope” airs Sunday January 13th on STARZ.