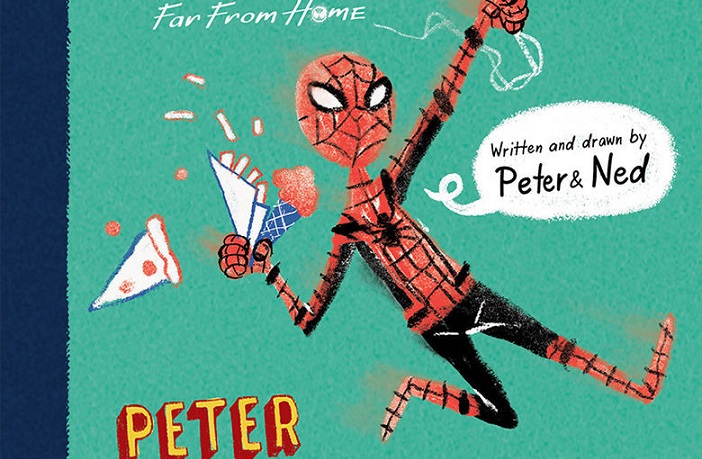 Spider-Man: Far From Home isn’t hitting theaters until July, but the time to get hyped about the action and adventure to come is right now!

In celebration of the upcoming film, Marvel Press is rolling out some amazing companion books, including Preeti Chhibber‘s Peter and Ned’s Ultimate Travel Journal, a hilarious look at the big European trip straight from the perspective of the two Queens besties.

We were lucky enough to talk to Chhibber, who co-hosts the Strong Female Characters and Desi Geek Girls podcasts on top of being a Twitter goddess and author, all about writing about the Spider-Man universe, what other Marvel characters she’d like to tackle, and more. Check it out!

How did you get involved with writing Peter and Ned’s Ultimate Travel Journal for Marvel?

I’d written some ridiculous / humor posts about Spider-Man over at SYFY Fangrrls. Also — because I am firm believer in telling the universe what you want — I kept talking about how I wanted to write a Spider-Man book on Twitter. Eventually a friend (fellow Marvel writer Brandon T. Snider) found out Disney was looking for someone who loved Spidey and would be interested in writing a Far From Home tie-in, so they put my name in, I sent in some samples, and the rest was history (it happened very quickly!).

Since there’s tons of illustrations involved, did you work with George McClements and Stéphane Kardos as you wrote or did their piece come in after? What do you think of the illustrations?

Unfortunately, I didn’t get the chance to work with them directly, but as I was writing the book, I put in notes for what I thought the illustrations on each page could be — when I saw those suggestions come to life, I was blown away by the art! Both Stéphane and George are so talented, they created the most adorable versions of these characters.

With everyone so focused on Peter, Ned’s voice isn’t explored much. What was it like writing from his perspective?

It was a blast. Ned’s such a great character, and Jacob Batalon is a joy to watch on screen – I was psyched to bring some of that to the page. Ned’s a little more confident than Peter, and more ready to trust himself in so many ways. I generally identify more with Pete, so it was interesting to be in the shoes of someone who didn’t seem to overthink as much and was really there to live in the moment and enjoy himself. Something that I do really love about Ned is how much joy he finds in his experiences, regardless of what else is going on. He’s an incredibly positive person (barring Earth-ending mortal terror and all that).

There are so many fun aspects of both travel and journaling. What did you have more fun writing– the superhero antics or the general “teenagers traveling” antics?

I love the “teenagers traveling” antics because I’m a sucker for a slice of life story. I love the downbeats between the action, where you get to see what normal is like for superheroes. It’s where they’re at their most relatable for the rest of us non-powered folks.

If you could recommend one travel destination to Peter and Ned outside of their European stops, where would it be?

How can I not say India? It’s rare we get to see non-Western travel destinations outside of self-help or a personal journey of a tourist’s spirituality — I’d love to see India through the eyes of a couple of best friends on a school trip, learning about the scientific and mathematically history, but … also getting into more than a little bit of trouble. Because you know: That ole’ Parker Luck.

If you could write an official novel or guide for any Marvel character, who would it be and why?

Ah, this one is hard! But… I think Felicia Hardy?? I’ve always loved The Black Cat as a character – she’s not all bad, or all good, and I love a good morally gray character. She’s also such a great foil to whatever hero she’s paired up with or against. Felicia’s smart and always trying to better her life in whatever way she can… and sometimes that means burglary. Or starting a crime syndicate. You know, as you do. But she has a heart of gold!

What are you most looking forward to seeing in Spider-Man: Far From Home?

I’m pretty excited about Jake Gyllenhaal joining the MCU! Mysterio was such an unexpected way to go. And of course, Peter and MJ! I’m such a shipping dork, but it’s Peter and MJ! Zendaya is so great in the role, I loved that they wrote her as smart and socially conscious and funny in Homecoming. And I am so, so, so glad they told us in the trailer that she knows he’s Spider-Man, I think it’s going to open it up to so many more fun sequences with the two of them.

Spider-Man: Far From Home: Peter and Ned’s Ultimate Travel Journal is out on June 4, 2019. You can pre-order now via Amazon or support your local independent bookstore via Indiebound.

Once you do, there are pre-order perks to be had! Check out Preeti Chhibber’s post below for all of the details: