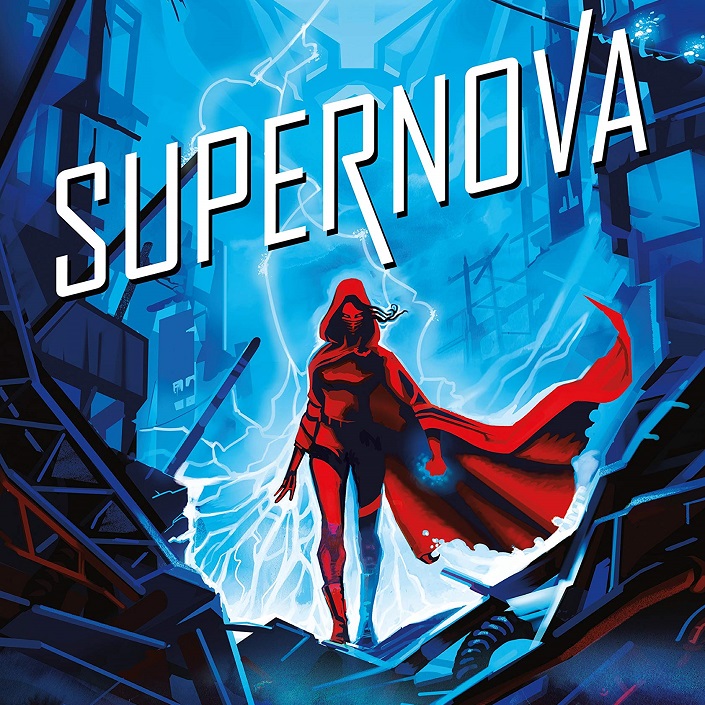 Are you ready for the release of Marissa Meyer’s Supernova, the third book in the Renegades trilogy? If not, no worries! We’re teaming up with Fierce Reads and some other heroic book bloggers to get you up to speed with the Prepare For The Supernova readalong!

If you’re just catching up with this epic recap, check out the Renegades refreshers via Team Fierce Reads, The Book Addict’s Guide, Twirling Pages, and emmmabooks. Then fly over to Fierce Reads to read the recap for the first 15 chapters of Archenemies.

Now we’re taking over to cover chapters 16 through 30. After our recap, we have an exciting opportunity for you to win a Supernova prize pack thanks to Fierce Reads!

Are you ready? Do you have snacks and a drink and your superhero footie pajamas? (We know you have them!) Let’s get ready to reeeecaaaaaaap!

Adrian makes his way down to the artifacts department to find Winston Pratt’s first puppet while Nova is on duty. Together they go through the relics of her former home, Nova is worried at the prospect of Adrian finding the doll. After all, she suspects Winston means to rat on HER. Unfortunately, Adrian finds the puppet. On the way out, they find Callum and Snapshot squabbling over a Vitality Charm, which Adrian also checks out of storage.

Nova is both right and wrong about Winston– He does rat her out, but only in part. After seeing his precious doll, he tells Adrian that Nightmare is still alive and refuses to say more. Adrian rushes to tell his dads, but they don’t believe him because The Puppeteer has been in jail since long before Nightmare’s death and wouldn’t know her status, right? Little do they know…

Adrian is so distraught that he eats a piece of cheesecake without tasting it– A true crime!

The next day, Agent N training begins. Nova is the only person who seems to be concerned with what will happen if Renegades abuse Agent N– We all see you, Frostbite! While everyone is busy getting into training mode, Nova steals the sample vial of Agent N and replaces it with a decoy. Now the Anarchists have the power, as well!

The team begins their shooting practice, but there’s one problem: Adrian is trash at shooting, as are many others. Not a great thing when you’ll be shooting a power-neutralizing agent at someone and don’t want to miss! Nova tries to give him a proper lesson, but all that close contact just gets him flustered instead.

He must keep his cool well enough though, because Nova’s finally aggravated with the lack of “results” in her mission to get close to him. She seeks out some advice from Honey at the Anarchists’ HQ. Turns out Honey has got some subtle but effective moves to suggest.

Meanwhile, Adrian is busy with a plan of his own. That Vitality Charm he took earlier is a one-of-kind protector, or so Adrian thinks. He heads to Max’s room with a risky idea: To see if it will allow him in without Max’s power destroying his own. But, in a moment that brings on SO MANY sibling feels, it works! Adrian and Max can hug it out for the first time ever!

This happy moment is broken up when Nova finds Adrian inside the room. As the brothers explain the Vitality Charm to her, Nova realizes that the charm could also be used to protect the Anarchists against both Max’s powers and Agent N. With Renegades given the power to neutralize other prodigies at will, this may be the counter-weapon she needs.

But Nova didn’t show up at the Renegadrs headquarters for the Vitality Charm. She is on. a. mission. to get Ace Anarchy’s helmet out of that chromium box and she’s using SCIENCE! After lots of careful planning, her electrolysis experiment begins… aaaand blows up in her face. Literally.

When Adrian gets home, he finds himself confronted by the wrath of his dads. Turns out that security footage caught him in Max’s room (whoops!) and they think Adrian sacrificed his power for Max. He tells them about the Vitality Charm and even though they’re thrilled at the prospect, they swear Adrian to secrecy. Of course, there’s one other person who already knows…

And that person, Nova, is still cleaning up her mess in artifacts when she gets very rudely interrupted by Frostbite. The icy prodigy needs a Sound Deadener for her big mission– and if that ain’t foreboding, nothing is.

Just upstairs, Adrian sneaks Max out of his room for a surprise revendevous with their dads. Simon has never been able to be in the same room as Max, so this is a *big moment.* While they celebrate, Hugh pulls Adrian aside to let him know that he put Frostbite’s team on the infamous Hawthorn case, and Adrian is none too pleased with the development.

Adrian tries to let the slight go, but the thought of Frostbite’s rash team failing to take Hawthorn and her accomplices in leads him to follow the team’s tracker juuuust in case. He catches up with them and watches as the Renegades take down Hawthorn’s team. Adrian feels some jealousy at the glory they’ll be getting… but then the ticking of the Sound Deadener begins. Instead of bringing them into face trial, Frostbite and her team are interrogating and torturing them.

Adrian can’t stand to watch the injustice, so you know what comes next. The Sentinel is back! Unfortunately, for all his good intentions, Frostbite, Stingray, Gargoyle, and Aftershock beat the crap out of him. When she realizes she’s not going to get answers from Hawthorn, Frostbite commits her most horrific atrocity yet: She tells Gargoyle to kill Hawthorn, which he does immediately. In the tussle afterward, Adrian barely manages to escape with his own life. WHAT THE WHAT JUST HAPPENED?!

Later that night, Nova makes a surprise visit to the Everhart mansion to continue her mission. She wants to find a moment to slip away and do some reconnaissance, but Adrian has other plans. He shows her around and eventually brings her to his art studio, where he’s perfectly painted out her dream. Then he uses his powers to bring the dreamworld into reality. SWOON!

But there’s one strange extra detail. When Adrian brings the statute into the real world, it’s holding an honest-to-goodness star that neither he nor Nova can explain. Perhaps a supernova?! Dun dun duuuunnnnn!

As they relax in the oasis of the dreamland, Nova tells Adrian about her family’s murder; the true reason she never sleeps. Adrian comforts Nova and the two cuddle in the jungle room until even Nova eventually falls asleep. It’s so freakin’ adorable and warms our hearts, but also why aren’t they kissing?!

Congratulations! You’ve made it through chapters 16 – 30 of Archenemies, which means you’re almost caught up! Now it’s time to read the remaining chapters and catch up with a dash of ash for the final recap on 10/24!

Supernova is out on November 5, 2019. You can preorder your copy now via Amazon or Indiebound!

NOW FOR THE GIVEAWAY!

Thanks to Fierce Reads, one (1) lucky winner who enters below will receive a Supernova prize pack that includes: