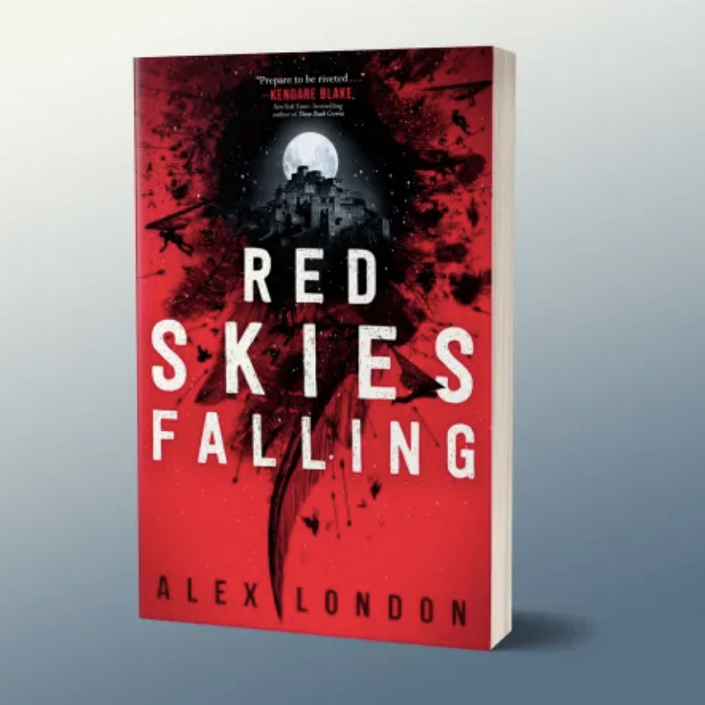 Kylee and Brysen are back fighting in RED SKIES FALLING Excerpt!

Red Skies Falling, the sequel to Alex London‘s high-fantasy Black Wings Beating and second novel in the Skybound Saga, follows twins Kylee and Brysen as they find themselves separated and preparing for war. With the book’s release just days away, a lengthy excerpt has been released, and will build even more excitement for what is sure to be an epic novel. Read the excerpt below:

Brysen followed the signs in the fading daylight. The snag of fluff on mountain hawthorn, the spot of blood speckling the jagged shale of a cliff face, the nervous cries of displaced crows as they burst from a copse of chir pine.

A hawk was near.

He looked out from the rocky slope where he’d crouched and saw a huge murmuration of starlings whirling against the pale pink sky. As the sun dropped behind the far mountain range, red coated its peaks, like teeth gnawing the horizon raw. The black cloud of birds oozed sideways, then spun straight up, a single mind in a thousand feathered bodies. They rose in a vortex, erupted apart, then merged into one mass again, undulating higher and higher, inventing new shapes as they flew. Augurs read fortunes in these shapes, saw the unfolding of fates, but Brysen had never had an interest in augury and tried not to think too much about fate. His had never been promising.

He knew that a solitary predator like a hawk wouldn’t risk diving into the middle of a large flock of starlings, but any starling that strayed too far from the group’s center might become a target. Surely the hawk he was chasing watched this aerial display from some hidden crevasse, waiting for a chance to strike. If Brysen could think like a hunter on the wing, he could find where his quarry hid.

He scanned the rocks, looking for the shape of a bird of prey, one that looked much like any other but that he would know from every other.

Falconers lost their birds all the time. Raptors weren’t like house pets, whose affections bound them to their masters; their hungry hearts didn’t love the way a person’s did. They stayed close when it suited them, flew to the fist for their own reasons, and could leave for even the smallest slight: an up- raised voice, a paltry meal, an angry gesture, or a shock of fright.

Shara had flown off to escape the ghost eagle; he’d sent her away. It had been the only way to save her, but the wind and the sky didn’t take intentions into account, and gone was gone no matter the reason. Any decent falconer would count Shara as a loss, and move on to trap and train a new bird. Brysen, however, was not a decent falconer. He was a dreamer; he counted on his dreams to lead him where past experience and the sum of expert opinion refused.

Shara knew the way home. Most hawks were territorial to some extent and preferred to hunt in familiar places. Brysen knew Shara would return, the way mountain laurel knows to flower when the wind begins to warm. He knew it because it simply had to happen. There was no him without her.

Read the rest of the excerpt here! And make sure to catch Alex London’s Red Skies Falling when it hits shelves on September 3rd.