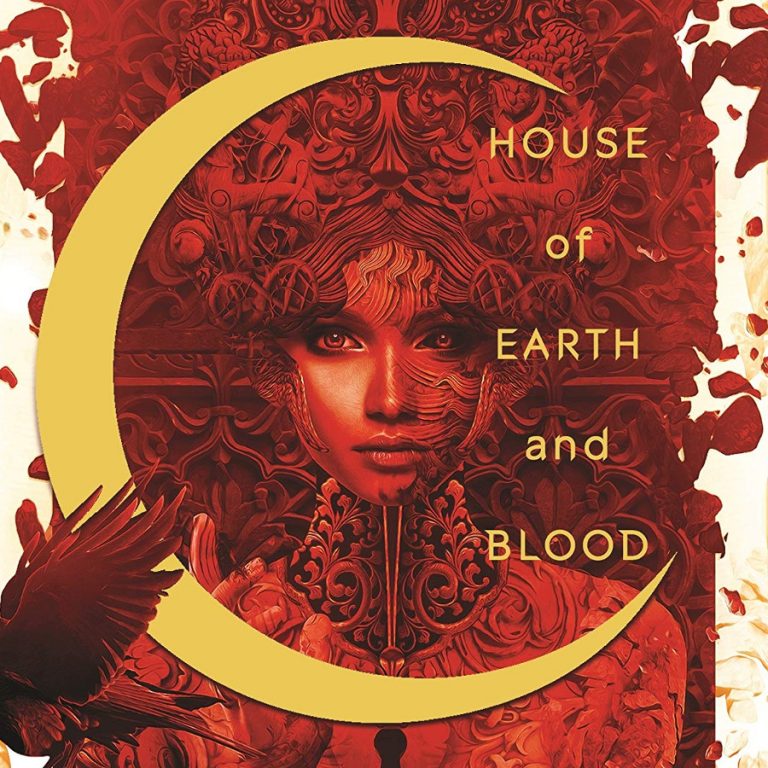 Sarah J. Maas weaves an intriguing and dramatic murder mystery full of magic, beauty, and horror, with humans and fantastical beings, in her first adult book, House of Earth and Blood.

***This book was given to me by the publisher in exchange for an honest review.***

Content note: This book falls along the genre of New Adult Fantasy, not Young Adult Fantasy. Subject matters regarding sexual interactions and profanity are therefore more often displayed and more descriptive than in a YA book.

The House of Earth and Blood is the first book in a new Adult Fantasy series by bestselling author Sarah J. Maas. The story takes place in Crescent City, home to various types of species, humans and non-humans alike, including fae, wolf-shifters, pixies, vampyrs, witches, and angels. It is also home to half-fae, half-human Bryce Quinlan, the main protagonist of the story.

Bryce is known for her love for drinking, drugs, and sex and is quite proud of her carefree ways. But when her roommate and best friend, wolf shifter Danika Fendyr, is slaughtered along with her pack, Bryce’s life as she knows it, is over.

It’s not until almost two years later, when someone else is killed in the same manner, that her assistance is requested, then ordered, in finding out who killed Danika and the others. Angel and elite assassin Hunt Athalar has been ordered to aid her in her search, despite her distrust and distaste of him.

Athalar has his own qualms about working with Bryce, but labeled as a traitor, he is forced to serve Micah, the governor, to kill whomever, whenever, and however, it is demanded of him. So, when Micah offers him a chance to be closer to freedom if he agrees to stay with Bryce and help her, he does, even if he finds her shallow and flippant.

As they begin to start working together, they find more and more clues about the murders and the motive. Of course, they also start learning more about each other and themselves the farther into the investigation they go. But the closer they get to each other and to solving the murders, more dangerous things get, not only for them, but possibly for the whole city.

Now, having read only the first book in Sarah J. Maas’s Throne of Glass series, and not being all that impressed by it, I wasn’t sure how I was going to manage getting through an eight-hundred plus page book by said author. But it had been several years since the reading of Throne of Glass, and I had heard enough excitement about House of Earth and Blood, that it interested me. Not only that, when I saw the cover reveal, I found it stunning and beautifully intricate, and was actually even more intrigued.

First off, I believe Maas did a good job in her characters. She makes them believable. They struggle through personal issues that we can relate to in our own lives, and being that the book is pretty thick, she definitely takes her time in their character development.

Bryce is introduced as somewhat of a substandard type of person, being only half-fae, which is looked down upon, especially since she doesn’t have the abilities that any of the full-fae beings have. Despite that, she’s not timid and she goes about her life as she pleases. But it’s when her friends are killed or gone, that’s when we get to see the vulnerable side of this character. What I like about this character is that even though she sometimes doesn’t make the best decisions as we see early on in the book, she earns respect from the reader as we get to know more about her.

As for the male counterpart in the story, Hunt Athalar has good reason to be the brooding and serious angel that he is, and the author allows more of his backstory revealed earlier on, which gives the reader more reading time to like him, or at least feel compassion for him.

We do get to know a little more about some of the other characters, including Ruhn Danaan, the Crown Prince of the Valbaran Fae, but not nearly as much as I would’ve liked.

Much of the book is going through the characters’ thoughts and processes, mostly Bryce and Hunt, which is fine. However, further along into the book, it can feel a little too drawn out, especially in the middle portion of the book. Still, Maas’ timing of revealing certain details of a character work in her favor, especially when it comes to the final quarter of the book.

Though there is some action that takes place, most of the story is in how the protagonists start trying to fit all the pieces of this crime/murder mystery. And, of course, there’s the romance element of the story, which is limited for reasons, but thankfully it’s not rushed, which occurs all too often in New Adult and Young Adults books.

The real highlight is that last quarter of the book, when the pieces are finally put into place and we can see most of the details we’ve read throughout come together to have it all make sense. And I can’t say that I would’ve been able to predict how the story ended up at all. Honestly, I enjoyed the conclusion more than I thought I would.

Overall, it’s the characters that kept me coming back to reading the book, and the finale was exciting, fast-paced, dramatic, tearful, and downright satisfying. Maas knows how to give these characters life and getting to the ending is worth the read.

You can get a copy of the book in either of the links below: