Book Review: A TREASON OF THORNS by Laura E. Weymouth 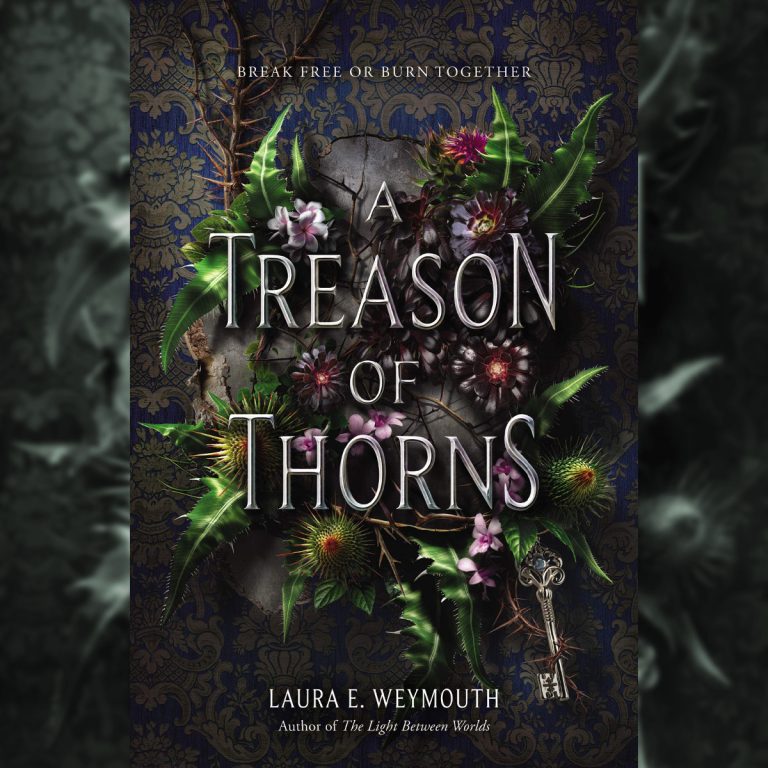 A Treason of Thorns by Laura E. Weymouth has an incredibly unique story where a girl has to take care of a sentient house! I’ve never heard of any other storyline like this (maybe other than Monster House the movie) and I was anxiously flipping the pages to see how the story would go.

Violet Sterling grew up in the Burleigh House with her father, George, and close companion, Wyn, after her mother left the family to start another. Burleigh is one of the six Great Houses of England and must have a Caretaker to safely channel its house magic for the betterment of the countryside. Burleigh and Violet had a strong connection since Violet was young, allowing beautiful blooms and ivy to curl tenderly around her or carpet her steps, but this idyllic past was ripped away when George was found guilty of treason against the king. After being exiled for 7 years, Violet is requested back by the king to control the Burleigh House from leaking destructive magic, but will she be able to do so without destroying herself in the process?

The world-building, or rather, house building *wink wink*, is a wholly fascinating way of taking an inanimate object and personifying it. The House is able to display its moods clearly to the readers through little quirks and give off an omnipotent presence. The magical connection between Caretakers, Houses, and the country is well thought-out but I would have liked to read more about the other Great Houses for a deeper understanding. Are the Houses connected or are they a single entity?

The only character I liked in A Treason of Thorns was Wyn. He’s loyal to a fault, unproblematic, and his appearance is refreshing after all the generic YA boys. First of all, he’s not a buff mysterious guy charming the panties off ladies throughout the country. Rather, I imagine him to be a skinny young man, quiet, thoughtful, and minding his own business. He sees Burleigh House as the unstable threat it really is but consistently helps Violet because, again, he’s loyal to a fault.

I wasn’t blown away by the pacing, maybe because it felt inconsistent. There was a part in the story (close to the climax) where Violet chose to delay the task she had been working toward throughout the entire story, just because she felt like it! Her attitude thus far had been rush, rush, rush, but now she gets to choose her vacations? I didn’t get it.

Despite some quirks, I admire Laura E. Weymouth for this intriguing premise of a “living” house with magic running through its foundations. Check it out for a story of a girl trying to save the only home she’s ever known.

A Treason of Thorns by Laura E. Weymouth was published on September 10th, 2019.

Violet Sterling has spent the last seven years in exile, longing to return to Burleigh House. One of the six great houses of England, Burleigh’s magic always kept the countryside well. And as a child, this magic kept Violet happy, draping her in flowers while she slept, fashioning secret hiding places for her, and lighting fires on the coldest nights to keep her warm.

Everything shattered, though, when her father committed high treason trying to free Burleigh from the king’s oppressive control. He was killed, and Vi was forced into hiding. When she’s given a chance to go back, she discovers Burleigh has run wild with grief. Vines and briars are crumbling the walls. Magic that once enriched the surrounding countryside has turned dark and deadly, twisting lush blooms into thorns, poisoning livestock and destroying crops. Burleigh’s very soul is crying out in pain.

Vi would do anything to help, and soon she finds herself walking the same deadly path as her father all those years before. Vi must decide how far she’s willing to go to save her house—before her house destroys everything she’s ever known.

You can order a copy of the book at the following links: