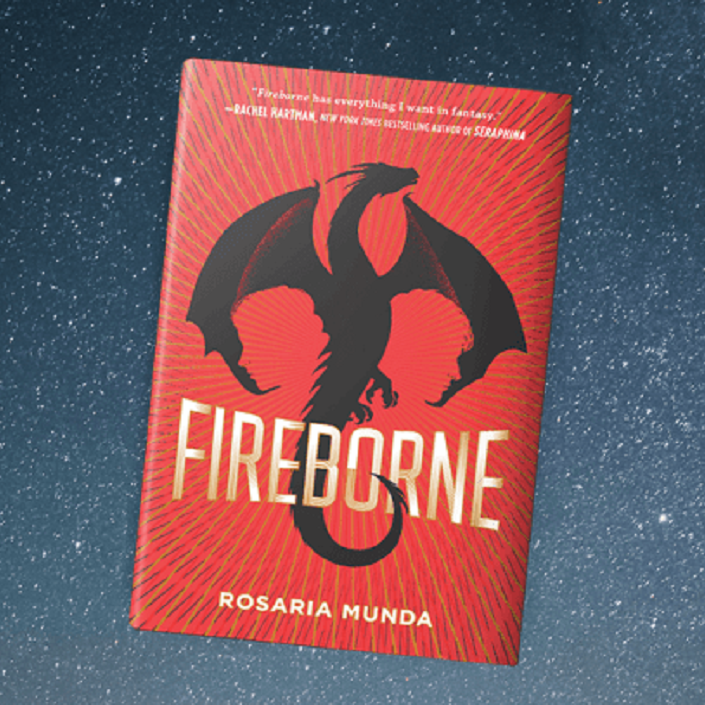 Rosaria Munda is about to take us all into a world of revolution, conspiracy, and freaking dragons in her debut novel, Fireborne!

Annie and Lee were raised in the midst of a revolution and come from very different backgrounds– one born into the revolutionary lower class, one born into the fallen aristocracy. Both they’re both elite dragonriders and share a close bond as well as a friendly rivalry. But when the old regime their nation once rebelled against comes back in full force, their training and their loyalties will by tested in unexpected ways.

Tor.com posted up a very enticing excerpt from the wild fantasy, one that introduces Annie and Lee’s world and the characters themselves. Take a look!

Before he met the girl, the boy in the orphanage moved like a sleepwalker. Tasteless meals, hard beds on cold nights, the bul­lying and the beatings—he passed through all of it unseeing. Let them bully him. Let them beat him. They were nothing. Their language was the one he had listened to as he watched his family die.

Instead of listening, he remembered. He remembered his family around him, his sisters’ laughter, his brother’s teasing, his mother’s voice. A world of light and warmth, great fire­places tended by servants, ornate glass windows overlooking the Firemouth, chandeliers hanging low over tables piled high with food. He remembered the sight of his father at court, resplendent as he received his subjects. He remembered lift­ing aloft, the city falling below, his father’s arm steadying him as the wings of his stormscourge beat the air. Her name was Aletheia, and sometimes, his father allowed him to bring her scraps from the table.

“One day,” his father told him, his arm around him as the highlands of Callipolis stretched below Aletheia’s wings, “this will be yours, if a dragon Chooses you. You will learn to rule, just as I did.”

“Did your father teach you?”

“What he could. But much of it came naturally to me, Leo. Just as it will for you. We were born to rule, just as the peasants were born to serve.”

He found that he could live in these memories for hours. And when they ran out, he invented futures: a dragon he would be Chosen by, dragonfire he would have power over, the people who had taken everything from him helpless and awaiting pun­ishment. He imagined making them pay.

When he did this, it kept the real world, and the other mem­ories, out. Nothing hurt so much as being forced back to the present.

That was what happened when he met the girl.

READ THE FULL EXCERPT VIA TOR

Fireborne hits shelves on October 15, 2019. You can preorder it now via Amazon or support your local independent bookstore via Indiebound!

Annie and Lee were just children when a brutal revolution changed their world, giving everyone—even the lowborn—a chance to test into the governing class of dragonriders.

Now they are both rising stars in the new regime, despite backgrounds that couldn’t be more different. Annie’s lowborn family was executed by dragonfire, while Lee’s aristocratic family was murdered by revolutionaries. Growing up in the same orphanage forged their friendship, and seven years of training have made them rivals for the top position in the dragonriding fleet.

But everything changes when survivors from the old regime surface, bent on reclaiming the city. With war on the horizon and his relationship with Annie changing fast, Lee must choose to kill the only family he has left or to betray everything he’s come to believe in. And Annie must decide whether to protect the boy she loves… or step up to be the champion her city needs.