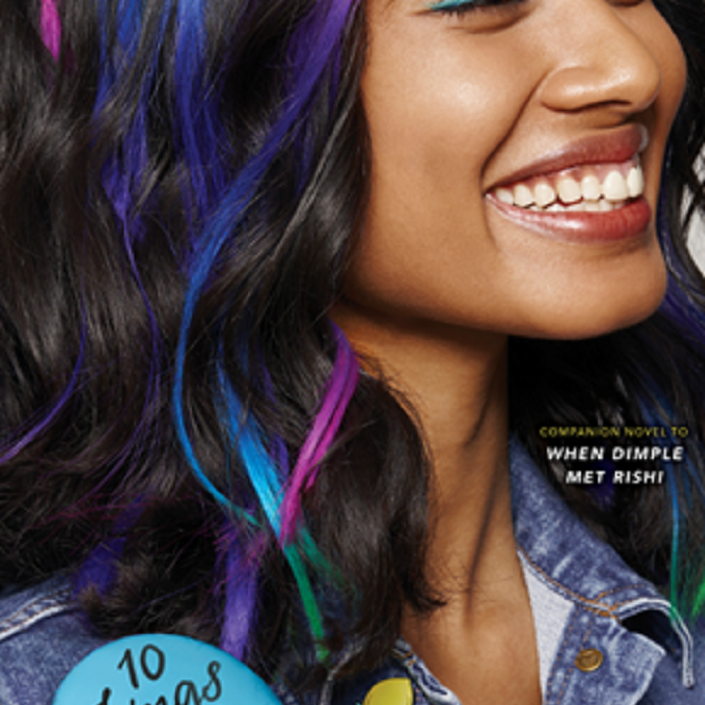 We must admit– We love Sandhya Menon‘s spunky takes on teen rom-coms steeped in Indian-American culture. They’re heartfelt and adorable! So of course, we’re thrilled to see that the series is continuing!

10 Things I Hate About Pinky will follow Pinky (obviously) and Samir, both of whom readers met in There’s Something About Sweetie. Pinky is a social justice advocate and a bit of a rebel with a streak of lousy boyfriends behind her. Samir is the most sheltered kid his friends have ever known and not one for catching social cues, but he always had to put his sick mother first. Now, the two are coming together for a little chaos!

In the new novel, Pinky cons Samir into pretending to be her boyfriend to get her traditional parents to ease off on the judgment of her love life. It’s a fake relationship, of course, but as Samir gets away from the struggles at home and Pinky gets to know him better… Well, you can guess where it goes!

EW shared the cover for the novel, which features Pinky in all her glory, along with the first chapter:

The dead body was an especially nice touch.

“This is amazing,” she said, touching Ash’s face. It looked waxy and pale, and his lips were the exact right color of death. Well, what death probably looked like, anyway. “You said Sweetie did this?”

“Yeah, she took a stage-makeup class last year,” Ash said, cracking open one translucent eyelid. “Does the hair look okay, though? I did that myself.”

“The hair’s poppin’,” Pinky said, lifting up a few strands of the purple wig he wore, the thick locks falling past his shoulders. “You look like you could start shredding on a guitar any minute.”

They were in Pinky’s living room, where they’d lit a dozen LED candles all over the furniture and floor and drawn the shades for extra ambience. Ashish was lying on the couch, his arms crossed on his chest, barely breathing. Of their friend group, he was the only one who’d been able to help her out on short notice; everyone else had already flitted off to various holiday destinations. Ash himself was leaving for Hawaii later today.

“Okay, do you have what you need now?” Ash said, shifting a bit on the couch. “This wig’s pretty itchy.”

“Almost.” Pinky stepped back and took a couple of pictures with her phone. “Let me get a wider angle. . . .”

“What charity’s this for, again?” Ash asked, peeking at her through the fringe of his wig.

“Don’t you ever listen when I talk?” Pinky asked, huffing a bit.

Ash laughed. “Seriously? This is, what, like, charity number thirty-two you’re helping this week?”

He had a point. “Fine, fine. It’s for the GoFundMe page of that nonprofit Super Metal Death,” Pinky said, taking another picture. “They used to be just Metal Death, but they really amped up their community-outreach efforts last year.”

A white Porsche Cayenne had just pulled up, and a moment later, her mother stepped out, eyes hidden by her sunglasses, Hermès pantsuit still perfect after an eleven-hour workday. She speed walked to the house, her thin face wearing that same harried, pinched expression it always did.

10 Things I Hate About Pinky hits shelves on June 30, 2020, but you can preorder your copy right now via Amazon.

Cover Reveal & Excerpt: OF CURSES AND KISSES by Sandhya Menon