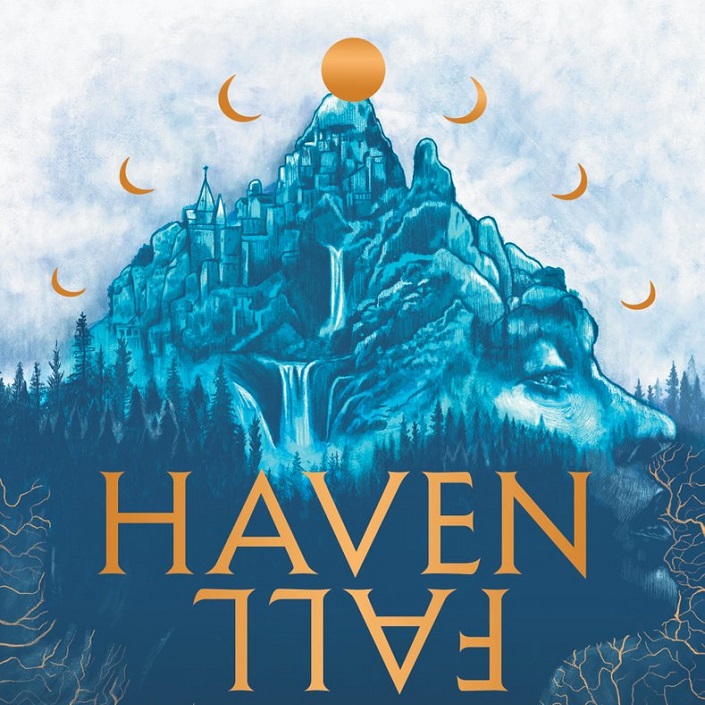 Sara Holland made quite the splash with the Everless duology, a medieval-inspired fantastical journey through a world where time is a life force to be collected, traded, and sold. Now she’s back with the first book a new duology!

Havenfall follows Maddie, a teen who’s had a dark youth but finds refuge in summers at the Inn at Havenfall, owned by her uncle. The inn isn’t just any old travel lodging– It’s a place where different worlds converge, protected by an ancient power. So when a dead body is found in Havenfall, Maddie and her companions know that the very fabric of their world is in danger. Can they catch the killer and avert an even bigger disaster?

Sarah Holland recently released the stunning yet eerie cover for the novel, which was designed by British illustrator Peter Strain. At first, it looks like a simple mountain landscape, but as you study the details, there’s a lot more to see!

And you know what all that gold means? A shiny cover!

Havenfall hits shelves on March 3, 2020. You can preorder it now via Amazon or support your local independent bookstore via Indiebound!

Maddie Morrow lives for her summers at the Inn at Havenfall, hidden up in the mountains of Colorado. The inn is the only place where she gets to see the boy she loves, Brekken, and it provides an escape from her real life, which consists of endless mind-numbing days at high school . . . and visits to the local prison where her mother sits on Death Row accused of murdering Maddie’s brother.

But the inn is much more than it appears. The manicured gardens, Mirror Lake, and even the building itself hold a tantalizing power, a magic meant to protect all who seek refuge and peace. Maddie’s uncle runs the inn, guardian of the gateways to the hidden worlds that converge in the tunnels, and she dreams of one day taking it over.

But this summer, everything is going wrong. Maddie almost gets run over by an alluring new staffer, Taya, her relationship with handsome Brekken becomes complicated, and then the impossible happens: a dead body is discovered, shattering the inn’s sanctity. As questions mount over who’s responsible, Maddie realizes even greater dangers face them all.

With everything she loves at stake, Maddie must confront startling truths about the secrets lurking beneath Havenfall, and within herself.

The Fandom’s Most Anticipated YA Books: December 2018