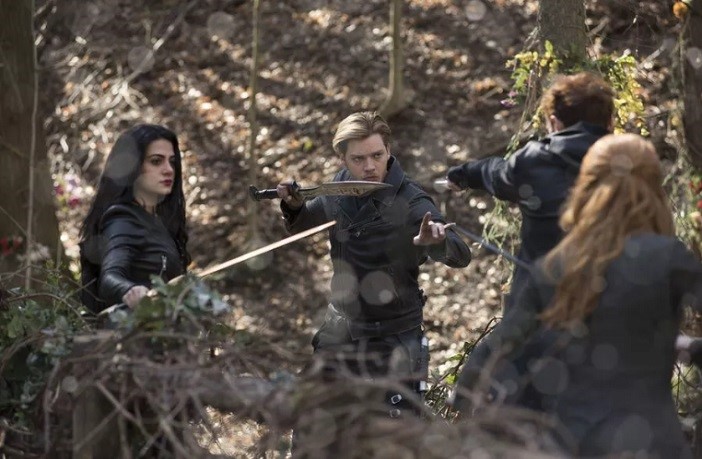 Let the showdown begin! As we gear up for Shadowhunters‘ two and a half hour finale next week, we can’t help but notice how the final puzzle pieces were laid down.

So what exactly are these puzzle pieces?

Whew Clary, you scared us there for a second. Thankfully, Clary (Kat McNamara) is no longer evil and she’s feeling pretty guilty about what she did with her dear brother.

It’s okay, Clary. All you did was kidnap the Seelie Queen– who, let’s face it, no one really cares for anyway. After hearing about this Bonnie/Clyde stunt, Jace (Dominic Sherwood) and Alec (Matthew Daddario) decided to plan an ambush on the two.

You see, Jonathan and Clary were planning to trade the Seelie Queen (Kimberly-Sue Murray) in exchange for the Morning Star sword. And unbeknownst to them, our Shadowhunters laid waiting in the shadows. So the moment Clary got the sword in her hands, Jace and Izzy (Emeraude Toubia) immediately go in to tackle her.

In an epic showdown, the Shadowhunters sadly failed and at the end of it all, Jonathan (Luke Baines) flies away with his dark angel wings.

On the upside, during the fight, Alec destroyed the twinning rune, thereby bringing our dear Clary back to normal. While the Shadowhunters recuperate, the Glorious sword explodes.

Meanwhile, Magnus (Harry Shum Jr.) is having some deep father-son bonding time, still reeling from the sudden breakup. In an effort to get back into his son’s good graces, Asmodeus (Jack Yang) returns Magnus’s magic to him and takes back his apartment for him… by turning Lorenzo Rey (Javier Muñoz) into a gecko.

I guess that’s one way of getting what you want.

Of course, as any concerned mother would do, Maryse Lightwood (Nicola Correia-Damude) decides to meddle in her son’s personal life by approaching Magnus about the lack of… um… an engagement announcement. If you remember, Alec previously asked his mom for the family ring so that he could propose to the warlock. Well, Alec obviously returned the family ring to her, skimming over the breakup. And being the intelligent warlock that he is, Magnus puts two and two together and realizes he’s been played.

When Magnus confronts his father, true intentions are revealed and Magnus ultimately restrains his father in magical bonds and opens a portal. With a flick of his wrists, Magnus incapacitates his father and sends him away for good. Bye bye daddy dearest!

So while all of the family drama is taking place, Jordan (Chai Hansen) and Maia (Alisha Waiwright) are chilling at the beach, debating the use of Heavenly Fire. Maia is feeling reluctant about becoming a mundane again, partly because she will lose Jordan if she does. Newsflash, Maia: Jordan’s dying anyway.

Luckily, Luke Garroway (Isaiah Mustafa) gets sprung from prison by the Praetors and rushes to the young werewolf’s rescue. Eh, not really. Somehow the Praetors found out about Jordan being in possession of the Heavenly Fire and they want Luke to get it back for them.

Luke finds Maia with the Heavenly Fire and promises to get rid of it for her. Maia returns to Jordan to find him gone… forever… as in, he’s finally got the axe. It’s time for Maia to accept her destiny as the new pack alpha.

Once the team reaches Alicante, Izzy is able to get most of the shrapnel out of her side, and Simon (Alberto Rosende) helps with the rest. Sparks are flying between them but their ‘moment’ quickly gets broken when Jonathan tears down the demon towers and opens a rift, letting flying demons into Alicante.

Our Shadowhunters try their best to hold off the demons but they quickly start to lose the tide. But since this is TV, help is on the way. Just like Arya in Game of Thrones, Magnus shows up out of no where and demolishes the demons in one swell swoop.

Jace and Clary find Jonathan and although Clary tries to talk some sense into her brother, Clary’s pleas fall on deaf ears. Now knowing that Clary will never reciprocate his feelings, Jonathan destroys the Morning Star sword and disappears, leaving the rift open for demons to continue attacking Alicante.

Of course, it’s Magnus who comes up with an idea, but don’t breathe a sigh of relief just yet. After letting Alec know that he’s disposed of Asmodeus, Magnus explains that he can boost his power, but has to return to Edom to do so.

In a crushing, bittersweet yet heartwarming scene, Magnus presents his boyfriend his ring and magics another ring so that they can have an impromptu wedding. Then, with a farewell kiss, Magnus portals to Edom, leaving Alec heart-broken.

Wow… talk about a roller coaster of emotions. I’m not sure I’m ready for the big finale next week!

No matter, Shadowhunters season 3 finale will air next Monday at 8/7c on Freeform. Get some tissues, my darlings. It’s going to be a doozy.