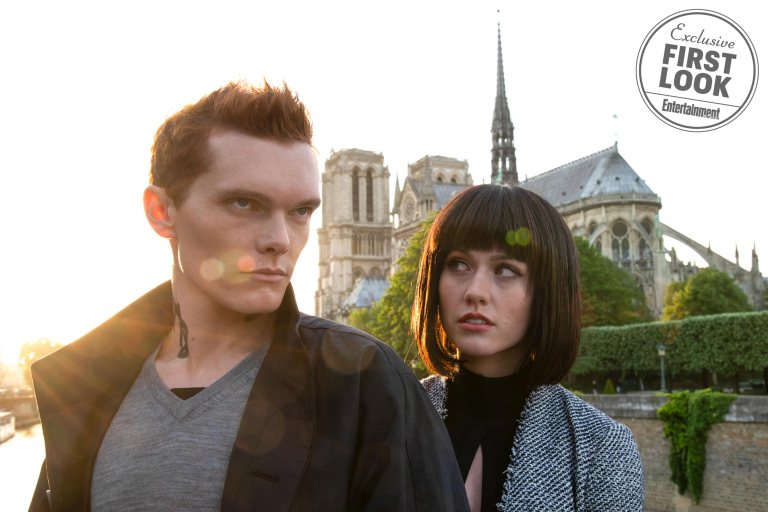 They say Paris is a city of love and romance. But Clary’s long-awaited trip to Paris was certainly not filled with love. So what exactly was this Monday’s Shadowhunters filled with then?

BONDING OR NOT BONDING

Ok, so I’m not going to lie, the writers had me fooled. I truly thought Clary and Jonathan (Luke Baines)were bonding during their little Paris escapade. Especially when he was opening up to her about “the most beautiful boy” who took pity on him at the height of his grossness, I just know Clary (Kat McNamara) saw the potential for good in him.

And when she confessed that he made her think how things may have been different if their roles were switched. Kind of reminds you of Harry Potter and Draco Malfoy, don’t you think?

Anyhoo, I don’t think Harry and Draco traipsed around Paris with one of them sporting a Chicago-esque wig. And one might even say “he had it coming” when Jonathan decided to end a particular store owner’s throat when the store owner claimed to have sold a coveted Morgenstern family heirloom.

Clary, meanwhile, was busy getting kidnapped before she was saved by her brother … albeit reluctantly.

Speaking of Clary, can we all just take a moment to appreciate this:

Thankfully, three of our favorite men came to her rescue — not that she needed saving. After all, she did do most of the heavy lifting (and stabbing) herself. So sure, this Paris trip may not have been the way Clary and Jace (Dominic Sherwood) pictured it but in true Clace fashion, they made the most of their unexpected moment. As for Jonathan, he bolted out of there faster than Clary did her hair transformation.

So as his best friend was across the pond, Simon was on his own adventure with our dear Izzy. The ancient vampire Simon (Alberto Rosende) was trudging through the sewers to find turned out to be Cain. Yep, Cain as in Cain and Abel from the Bible… or from Supernatural if you also watch that show.

And it seems that Cain has his own tragic story and is not quite the villain that the world has painted him to be. According to him, Lilith and Adam were together until Adam dropped her for Eve. So naturally, she exacted her revenge on Adam by turning Cain against his brother Abel. Unbeknownst to Cain, he also became a vampire and became a daylighter after drinking Abel’s blood.

In order to remove the Mark of Cain, Simon had to see his favorite (he said sarcastically) person again – the Seelie Queen. With the rock that Cain used to kill Abel, the process almost cost Simon his life. Honestly, if Izzy (Emeraude Toubia) hadn’t made him feed on her — thus ingesting vampire venom and risking her own sobriety — Simon probably wouldn’t have survived.

UTTER PURENESS DESPITE THE CHAOS

Luckily we still have Alec and Magnus (Harry Shum, Jr.) and while trouble’s most certainly brewing in their future, this week’s episode was all fluff as we peeked into Alec (Matthew Daddario) and Magnus’ new normal. While he’s still struggling to put on eyeliner and make freshly squeezed orange juice without magic, Magnus still can make his boyfriend swoon as we learned during their sexy sparring session. Ahem, I told you not to flirt with me. What?! Gah!

I love this couple so much and after everything they’ve gone through, I’m so glad the show is giving Malec a chance just breathe and be happy.