SHADOWHUNTERS 3×14 ‘A Kiss From a Rose’ Recap 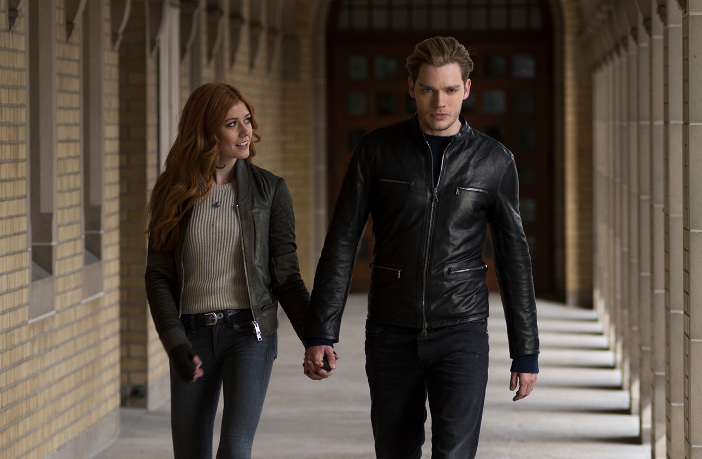 Don’t ever accuse Freeform of ever playing it safe ever again. I can’t believe they actually had Jonathan kiss Clary on tonight’s episode. Um… hello?! *whispers* That’s incest, Jonathan.

But at least we got to see some cute fluffy Clace moments before Jonathan (Luke Baines)rudely crashed and ruined the mood. So without further adieu, let’s hack through this insane Shadowhunters episode shall we?

Urg, I’ve got so many thoughts about this whole Jonathan-Clary-Jace storyarc. I’m keep flip flopping between loving it and hating it. But that’s neither here nor there as this is a recap, not an op-ed.

So here’s what you need to know:

We finally get to visit the wolfpack’s world again and see our wolves unload some much needed baggage after several episodes of dealing with this whole Clary and Jace situation.

This episode brings Jordan back into the picture and if you don’t remember, before getting with Simon, Maia (Alisha Wainwright)was in a relationship with Jordan. They didn’t work. But that’s ok because the writers decided to give us some closure.

Not that I blame Maia for being furious with Jordan after what he did but it was … almost relieving to see them acknowledge and accept what happened. Jordan (Chai Hansen)finally got to say his apologies for turning her into a wolf and Maia accepting his apology and essentially forgiving him was such a tender moment and break in the episode, I may have shed a tear. Especially as we weren’t sure whether he was going to survive or not.

Of course, we now know that he did and this event will inevitably change their dynamic and relationship. So we’ll just have to see how much their relationship will change.

Oh, where do I even start with our favorite gay couple? Magnus (Harry Shum Jr.)is still struggling with his loss of magic and even goes as far as to go to Lorenzo for help. And while it was nice to see the high warlock again, we are quickly reminded why our protagonists hate him.

Everything comes with a price and for Magnus, it was his apartment. Not that Lorenzo (Javier Muñoz) needed it. I guess it just goes to really show you how some people just can’t seem to let go of the past.

So when Magnus agreed to this exchange and came waltzing in to flash some magic in front of his boyfriend, I won’t lie, I got afraid for how Alec would take this new development.

But thankfully, even though it did cause some friction, Malec is A+ at communicating and they were able to sit down and talk through all of Magnus’s insecurities and Alec’s ability to reassure his boyfriend really speaks to the writers’ talent for creating such depth in these characters. Remember in season one when Alec (Matt Daddario)was absolutely terrified of even acknowledging his crush for the warlock? Oh how fast they grow up.

What did you think of this episode? Love it? Hate it? Let us know in the comments below! And we’ll see you soon for some more Shadowhunters fun.