SHADOWHUNTERS 3×18 “The Beast Within” Recap 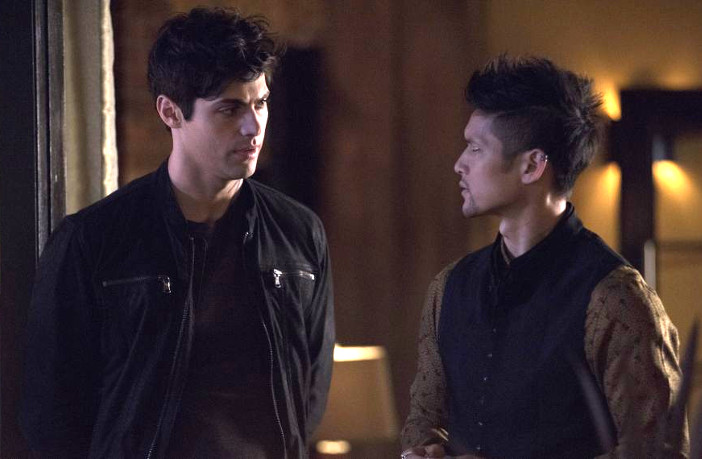 Shadowhunters’ “The Beast Within” is giving us all sorts of angst and tears, so beware of this spoilery recap!

It’s Halloween and an unusual amount of Drevak demons have been swarming the city, giving the Shadowhunters a busy night trying to prevent mundanes from being slaughtered. But why are they here?

Let’s start with Clary and Jonathan’s Twinning Rune. Isabelle explains that the Heavenly Fire serum can burn away Jonathan’s demon blood and thus take away the rune. Of course everyone agrees to it, so off we go to see Jonathan. Easy peasy, right? Well….not quite.

Surprise! After a visibly painful injection directly into Jonathan’s rune, they realize nothing happened, and the rune is still there.

Isabelle offers to try to make the serum stronger, but it will take several hours before the serum is ready. You see where this is going, right??

Before Isabelle can get the serum more potent, it seems that the first attempt at destroying the Rune has actually made the bond stronger between Clary and Jonathan, or maybe it’s just too late, because one minute she’s fighting a Drevak demon and the next she knocks out Jace and takes off.

Lanaia, Jonathan’s faerie companion/servant at his apartment, has been secretly working for the Seelie Queen, who has been using the Drevak demons as diversions to keep the Shadowhunters busy. Upon the Seelie Queen’s orders, she breaks into the Institute to kill Jonathan, but wahaa! Clary portals her way right behind Lanaia and chops off her head, then greets her brother with a big smile.

Oh, Alec, what were you thinking?!

After the previous night’s disastrous dinner, Alec is more concerned about Magnus’ loss of magic, and decides to do something about. Unfortunately, Alec’s idea on how to get Magnus his magic back is probably the worst decision he’s ever made. He successfully contacts Asmodeus, Magnus’ father, to request he give magic back to Magnus. Of course, Asmodeus has an ultimatum – Alec must break up with Magnus.

“Break his heart to save his life,” says Asmodeus.

While Magnus is helping Maryse decorating her newly purchased used bookstore, Alec takes the evening doing Shadowhunter stuff, including helping Clary, Jace, and Isabelle with dealing with Jonathan, but also getting some advice and contemplating on whether he should take Asmodeus up on his offer. (Don’t do it, Alec, you stupid Shadowhunter!)

Unfortunately, he couldn’t hear us through the TV screen, and in probably one of the most heartbreaking moments in the Shadowhunters series, he breaks Magnus’s heart and ends things, even after Magnus begs him with a kiss. Even knowing it’s going to hurt like hell.