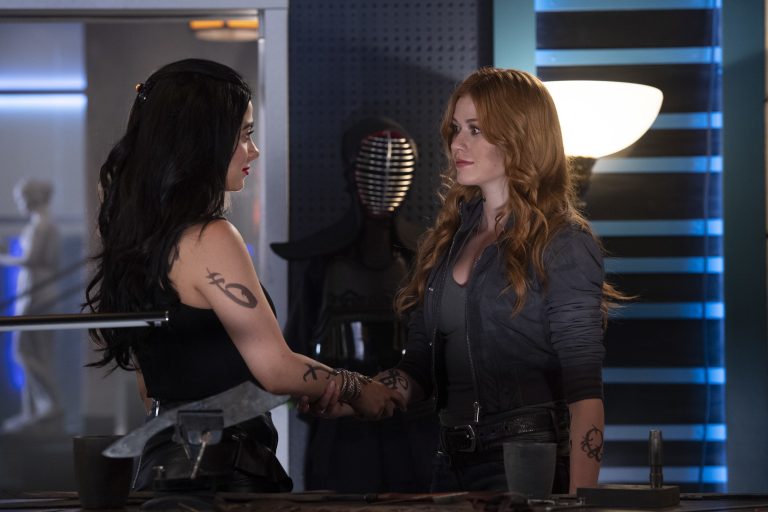 The finale featured a lot of major moments from the books– Those moments were just given to completely different characters. There are likely a few reasons for this from copyright (the series doesn’t have the rights to all of Clare’s books) to sheer convenience.

Despite the reasons, the finale received mixed reactions because of the storyline mix-up changed characters’ destinies in a big way and because Simon Lewis totally got screwed.

Let’s break it down, shall we? Beware: Book and show spoilers galore!

In the books, it’s Jace who shares a twinning rune with Jonathan (as a means to get to Clary, among other reasons) and he was imbued with Heavenly Fire when stabbed with Glorious to destroy their connection. Clary creates a rune to extract the Heavenly Fire into another ancient mythical sword and uses that sword to kill Jonathan in Edom. In the show, getting stabbed with Glorious doesn’t affect Clary at all, but it still imbues Isabelle with Heavenly Fire when she’s hit by shrapnel. She uses the Heavenly Fire to survive Edom and destroy Lilith before the gang shares her burden Guardians of the Galaxy style and the remnants burst out of them, destroying all of Edom.

Don’t get us wrong! Alec and Magnus do get married later in the Shadowhunters Chronicles series (specifically in Queen of Air and Darkness,) but only after they’ve traveled the world an adopted two children– one warlock, one Shadowhunter. But at the end of the TMI books, it’s Luke and the 100% not dead Jocelyn who finally get married. Given that Jocelyn is a goner on the show and everyone loves Malec, this is one of the more reasonable changes.

Affected in the LA Institute attack

Helen Blackthorn was just the tip of the iceberg for a major character set-up! In the books, she’s one of seven children whose family runs the LA institute. Clare’s TMI follow-up, The Dark Artifices, follows the family. The show doesn’t mention the Blackthorn family even being at the LA Institute. Instead, it’s run by Robert Lightwood, who’s taken Max with him. In the books, Max is long dead and Robert never runs the LA Institute, but the show needed a way to bring them back into the action.

Head of the New York Institute

In what will probably be a shock to the show-only crowd, Alec is a temporary head of the New York Institute for a only a short time in the books. After The Dark War and the defeat of Jonathan, it’s Jace and Clary who run the Institute and train up the next generation of Shadowhunters– as you can infer from that, Clary’s fate is totally different. When Alec gets promoted in the show, it’s Isabelle who takes over the Institute. In the books, Isabelle remains a dedicated Shadowhunter, but she’s never the boss.

Another caveat: Alec does eventually become the Inquisitor in the books, but several years after the fact, and even then, he’s pretty young for the job. At the end of the TMI storyline, it’s his father Robert Lightwood who takes up the position and does his best to atone for his past sins as a Circle member and generally not great father. In the show, Alec becomes Clave Inquisitor within a couple years of first being appointed as an Institute head while Magnus becomes the High Warlock of Alicante (a position that doesn’t exist in the books,) making them a serious power couple.

Loss of memory of the Shadow World… Sort of

In a major shocker, the Shadowhunters finale featured Clary losing her memories of the Shadow World completely as a punishment from the Angel Raziel for the use of original, “unnatural” runes– even though both the books and show say this power came from the angels and she used them to save the world BUT I DIGRESS. Upon seeing Jace while he’s glamoured a year later, Clary remembers his name and asks about his runes, giving fans clear hope that she can return to her old life. In the books, it’s Simon who suffers the total memory loss. It’s a willing sacrifice he offers up to Asmodeus to get the gang out of Edom alive. The loss hits everyone hard, especially Clary and Isabelle, but Magnus says that if they can find any proof that Simon has even a vague memory of the Shadow World, he can help the former vampire regain his knowledge. After many sly attempts by the group, Isabelle approaches Simon. While he doesn’t totally recognize her, he hands her a flier promoting a gig for his latest band: The Mortal Instruments.

Downworlder reverting into a Mundane

Complete loss of the Shadow World means Simon couldn’t be a vampire anymore in the book series, so when Asmodeus rips away his identity, he becomes a Mundane. In the show, Raphael becomes a Mundane after being injected with Heavenly Fire serum– a product that only exists on-screen. Raphael’s book fate is much darker: He remains a vampire, goes to Edom with the others, and is killed by Jonathan Morgenstern while there.

Did we mention that Simon Lewis got totally screwed in the TV finale?! Again, Heavenly Fire is a show-only design used to turn Luke into a Shadowhunter again. In the books, Luke remains a pillar in the werewolf community and it’s Simon who eventually becomes a Shadowhunter– Mundanes with the sight can do that, after all, and that’s what Asmodeus reverts him back to. There’s even an entire short story collection focused on his training, Tales From The Shadowhunter Academy.

We love Clizzy and women working together, but Simon is the oldest, dearest friend of Clary’s heart. In the show, Clary asks Isabelle to be her parabatai. Assuming she gets her memories back and rejoins the Shadow World, it seems likely to happen. It makes sense, given that Simon is still a vampire. But Book!Simon is eventually a Shadowhunter, Book!Clary never lost her memory, and the two are parabatai.

Which of these many endings works better? Well, you can decide for yourself!