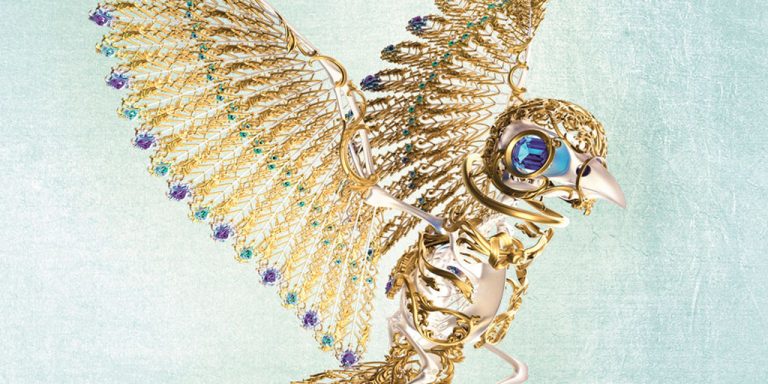 Reign of The Fallen was one of our favorites of 2018– Dark, gritty, and deceptive, set in a lush fantasy realm. Filled with monsters, death, and magic, this novel offers up kickass characters and a fresh world for readers to devour. Now, Sarah Glenn Marsh is kicking her impressive worldbuilding and storytelling skills up a notch with the heart-pounding sequel!

Song of the Dead takes Odessa and Meredy on adventures beyond Karthia as they discover new magic, strange traditions, and dragons. Yep, dragons! But when trouble begins stirring back home, Odessa knows she’ll need to defend her best friend and her nation as threats come in from all sides– including, perhaps, the Deadlands.

Prior to the release of Song of the Dead, we had a chance to pick Sarah Glenn Marsh’s brain and get insights on her characters, her writing style, and her preferred magical ability, among other things. If you haven’t read the sequel yet, don’t worry! This chat is entirely spoiler-free!

What was the first inkling of an idea for Reign of the Fallen and how did you develop the world from there?

The idea for Reign of the Fallen was inspired by my grandmother’s stay in the hospital. thankfully, she’s fine now, but the situation got me thinking: how far would someone be willing to go to bring a loved one back from the dead? What sort of sacrifices would someone make in order to bring an important person back into their lives, and what consequences might that decision have? Those questions led me to the Greek mythological hero Orpheus, who attempts to rescue his wife from the underworld and is told by Hades that he can take her back to the living world as long as he doesn’t look at her until they’re both out of his realm. Spoiler alert: he takes a peek and loses her forever. Drawing from that mythology, as well as researching rituals surrounding death from around the world, helped me to start building the world of Reign of the Fallen, where the Dead must wear shrouds in the living world or else become monsters; where change of even the smallest sort is outlawed because the Dead fear it; where entering the spirit world demands a painful sacrifice of any living person who dares to go there.

As for the Deadlands, the spirit world in the book, it was inspired by the Greek underworld! I took some of the themes from that world and put my own spin on it by having my spirit world be a landscape that’s ever-shifting, ever-changing, unlike the spirits themselves. It seemed fitting, somehow. Same with my spirit world being full of flowers and beauty, things that grow the way the spirits long to still.

You developed an original society with its own norms and rules. How did you decide on the parameters for life in Karthia? What felt like the most important element to include?

I created the culture and way of life in Karthia by studying different death rituals, beliefs, and superstitions from around the world and borrowing a little from many of them. I think one of the biggest, most important elements is how the Dead (the undead) fear change, and therefore have outlawed it—the reason being, of course, that death is a stagnant, permanent state, so change is a foreign concept to them. Forbidding change is what causes a lot of problems in the story, so this became a central element.

What would you say are Odessa’s best and worst qualities?

Odessa’s best qualities: She’s tenacious. She’s a loyal friend. She’s stubborn (this one goes both ways). She loves with her whole heart. She appreciates so many things about life and enjoys it to the fullest without any shame. She tries her hardest at whatever she does, even when things seem impossible.

Her worst qualities: She’s stubborn. She’s impulsive. She has a hot temper. She doesn’t always listen (but then, who does?). She can be too trusting.

What’s your favorite part of the relationship between Odessa and Meredy?

What I love about their relationship is that it really shouldn’t work, but it does. They’re aware of all that’s against them, and why they shouldn’t be together, but even the darkest and gravest of circumstances don’t prevent their feelings from growing.

Song of the Dead is taking us to new places in Odessa’s world! Can you tease us a little bit about what to expect?

You’ll see at least two new countries, and let’s just say that not every country has the same views towards different types of mages as Karthia does. You’ll also meet some new faces who join Odessa’s band of friends. Oh, and one very sweet, mouthy beastie named Nipper who will bite and claw her way into your heart! 😉

Of all the different magical abilities one can have in Karthia, which would you like to master and why?

I’d love to have a beast master’s ability! Then I could magically bond with one of my greyhounds.

I also would love having a weather mage’s ability. It would be such a powerful feeling to control lighting, and being able to help people by diverting storms away from vulnerable areas would be amazing.

I’m a plotter—I want to be a pantser, but the truth is, I do my best work when I plan everything out ahead of time. I always start with an idea, then begin building my world and characters so I can write a pitch. From there, I add more details to my world and characters (my pitch will usually show me where things are lacking), and then I’ll start hashing out a detailed plot structure to work from! I write full time, so each morning after coffee, I head into my office and get to work! I can’t write with music; rather, I put on my noise-cancelling headphones and listen to a nature track all day. It really helps me focus, and I’d recommend it for any writer looking for something a little different to help get them in the drafting headspace.

Song of the Dead is out now wherever books are sold. Snag your copy via…

The Dead must stay buried.

Karthia is nothing like it used to be. The kingdom’s borders are open for the first time in nearly three hundred years, and raising the dead has been outlawed. Odessa is determined to explore the world beyond Karthia’s waters, hoping to heal a heart broken in more ways than she can count. But with Meredy joining the ocean voyage, vanquishing her sorrow will be a difficult task.

Despite the daily reminder of the history they share, Odessa and Meredy are fascinated when their journey takes them to a land where the Dead rule the night and dragons roam the streets. Odessa can’t help being mesmerized by the new magic–and by the girl at her side. But just as she and Meredy are beginning to explore the new world, a terrifying development in Karthia summons them home at once.

Growing political unrest on top of threats from foreign invaders means Odessa and Meredy are thrust back into the lives they tried to leave behind while specters from their past haunt their tenuous relationship. Gathering a force big enough to ward off enemies seems impossible, until one of Queen Valoria’s mages creates a weapon that could make them invincible. As danger continues to mount inside the palace, Odessa fears that without the Dead, even the greatest invention won’t be enough to save their fates.

In this enthralling, heartrending sequel to Reign of the Fallen, Odessa faces the fight of her life as the boundaries between the Dead and the living are challenged in a way more gruesome than ever before