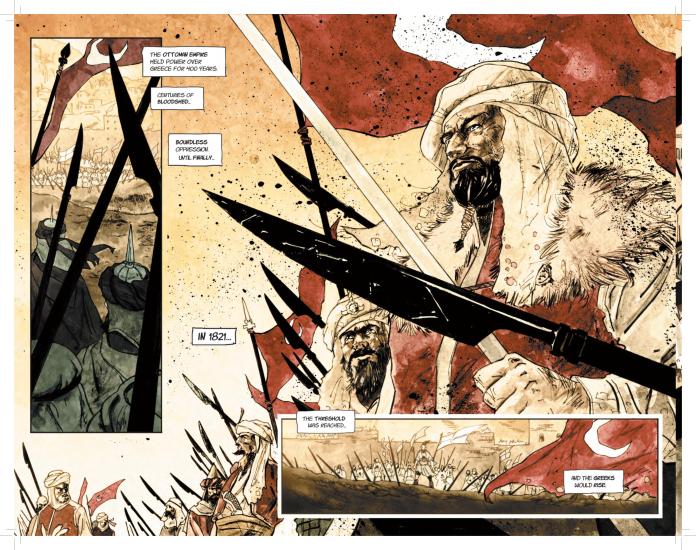 Sons of Chaos is the newest release from IDW and Game of Thrones fans may feel a bit of deja vu as they flip through this gorgeous graphic novel by writer Chris Jaymes and artist Ale Aragon. An epic, gritty tale of war intertwined with a coming-of-age element, Sons of Chaos follows Marcos Botsaris, the son of a Greek leader who was taken prisoner as a child by one of the Ottoman Empire’s most villainous pashas.

Before we even dive into the nitty gritty of Sons of Chaos, let’s give credit where credit is due:

Now that we’ve gotten the formalities out of the way, let’s dive into this book review. To streamline this review and make it easier for you lovely readers, I’ve split this review into three parts: the story, the artwork, the format.

But man, these characters go through hell. And if you’re queasy around blood and gore, I would stay away from this novel. But Jaymes has written such a captivating story with so many twists and turns that it’s easy to look past all of the blood and carnage.

Because underneath all the blood and carnage, Sons of Chaos is actually a very personal (and tragic) story. Almost a coming-of-age tale if you will. Readers will follow a young boy named Marcos as he grows up during this tumultuous era. Although we start off with a timid and lackluster of a boy, we finish with not only a fighter but a leader. It’s truly an inspiring transformation.

It’s also a story of fathers and sons. A son’s relationship with his father is complicated at best and Marcos’s is no exception. But what I found so unique about this story is how well Jaymes intertwines Marco’s story with the other story arcs.

Full disclaimer: I’ve always been a fan of multi-arc stories but they can be a hit or miss sometimes. Too many stories and it can get confusing. Too much focus on one particular character and it gets heavily one-sided.

The truth is, relationships are complicated and the relationships in Sons of Chaos make the graphic more than just a story about Greece fighting for its independence. Through the nuances and carefully thought out but complicated storyline, Jaymes brought the story down to a more personal level, crafting a story about people fighting for their own personal independence and impacting one another along the way.

As the famous saying goes: like a butterfly that beats its wings in one corner of the globe and with that single action changes the weather halfway across the world.

Now the artwork. What is there to say about the artwork? As a war comic, and a brutal one at that, Jaymes and Aragon’s artwork shows all the blood and gore. As I said before, this book is not for the faint of heart. With almost a sketchy, edgy style to it, the pages are raw and realistic. It almost makes me wish I had this book in my history classes. The pages literally look to be stained with blood.

Of course, the impact of the artwork is also partly because of the incredible colors. Hi-Fi’s muted colors have this gorgeous painted quality to them and while it may sound all dark and dreary, that’s exactly what this book called for. The story is bleak. The story is dark. And in the way Hi-Fi processed the coloring, the art almost looks to be colored with blood. Trust me, you’ll lose hours just studying and admiring the details in the the artwork.

Now, last but not least, let’s talk about this beautiful (oversized) hardcover piece of work. I’ll be honest. I was not expecting to receive such a huge bulky book. At first I was weary of the massive size of this novel but once I dug into the story, I found the panoramic format of the pages actually gave the story a wide-screen, cinematic feel.

There was so much detail in each page that in hindsight, this layout was absolutely necessary as it allowed the reader to take in every gory detail. It almost feels like you were reading an intricately-sketched storyboard for an epic film.

I’ll be honest. I am not a graphic novel reader. So I did not know what to expect. But I’m here to say that, as a non-graphic novel reader, I was pleasantly surprised. You can tell how much hard work went into crafting the Sons of Chaos.

I loved that this graphic novel was inspired by a true story so not only do you get to enjoy an epic story in the purest sense of the word, but you’ll also get to learn a little about a lesser known conflict that had major ramifications on the world.

So history buffs, GOT fans, take a chance and pick up this book.