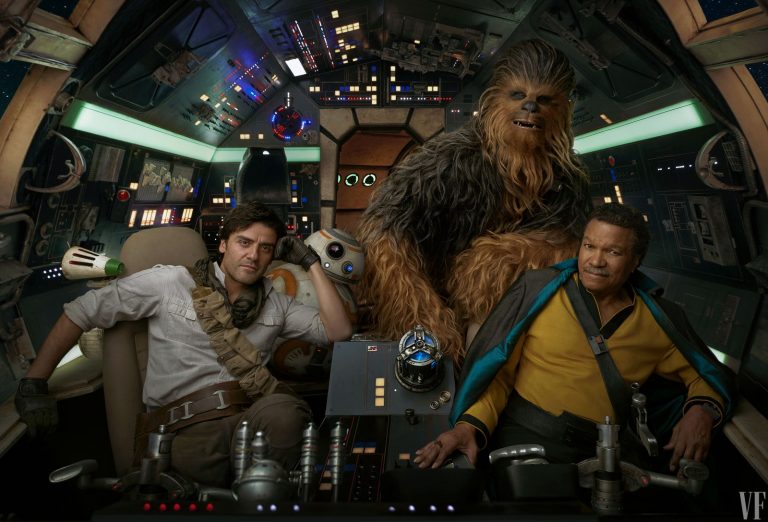 Vanity Fair has published a huge STAR WARS: THE RISE OF SKYWALKER preview that gives a behind-the-scenes look at the highly-anticipated final chapter.

The recent reveal of The Rise of Skywalker trailer truly kicked off the hype for the approaching December premiere, and this month’s cover of Vanity Fair is fueling the fire.

The story, written by Lev Grossman, features stunning photography from renowned celebrity photographer Ann Leibovitz. There’s even a behind the scenes video. On top of the amazing images, we also get interviews with J.J. Abrams and the stars of The Rise of Skywalker.

Abrams speaks profoundly about the amount of work and passion that went into closing out the Skywalker saga, a feat that presented its own unique set of challenges:

“That’s the challenge of this movie. It wasn’t just to make one film that as a stand-alone experience would be thrilling, and scary, and emotional, and funny, but one that if you were to watch all nine of the films, you’d feel like, Well, of course—that!”

Abrams also spoke to the question on many fans’ minds surrounding Leia’s presence in the film and how it will work. “There are moments in this movie where Carrie is there, and I really do feel there is an element of the uncanny, spiritual, you know, classic Carrie, that it would have happened this way, because somehow it worked.” He said, “And I never thought it would.”

Interestingly enough, Adam Driver was able to provide an interesting look into the mind of Kylo Ren (who we see on another Vanity Fair cover as well). He spoke to Ben Solo’s distant relationship with his parents, and a childhood that could have potentially left him with too many expectations to fill. He also hinted that fans will see what will come of the “camaraderie” he’d been forming with Rey.

Daisy Ridley spoke a bit to Rey’s mental state in Episode IX: “It’s nice having that shot at the beginning of the teaser because I think it’s quite a good visual representation of where she is now: confident, calm, less fearful.… It’s still sort of overwhelming, but in a different way. It feels more right—less like inevitable and more like there’s a focus to the journey.”

Oscar Isaac speaks to Poe Dameron’s character development — including some that we “haven’t seen,” bringing him out of the lone wolf tendencies we left in The Last Jedi. About Finn, John Boyega said he’s now made a “clear decision” about the team he’s fighting for.

And it seems the pressure is really on for our beloved heroes. According to the Vanity Fair article, “sources close to the movie say that Skywalker will at long last bring to a climax the millennia-long conflict between the Jedi Order and its dark shadow, the Sith.”

The story goes in depth on some of the amazing facts behind filming on location, such as J.J. Abrams’ dedication to creating an authentic world that Star Wars fans feel truly engrossed in.

We also learn from Star Wars veteran Anthony Daniels that even C-3PO will undergo some kind of change, doing something “surprising” in this film.

“This trilogy is about this young generation, this new generation, having to deal with all the debt that has come before… And it’s the sins of the father, and it’s the wisdom and the accomplishments of those who did great things, but it’s also those who committed atrocities, and the idea that this group is up against this unspeakable evil and are they prepared? Are they ready? What have they learned from before? It’s less about grandeur. It’s less about restoring an old age. It’s more about preserving a sense of freedom and not being one of the oppressed.”

Is it December yet?