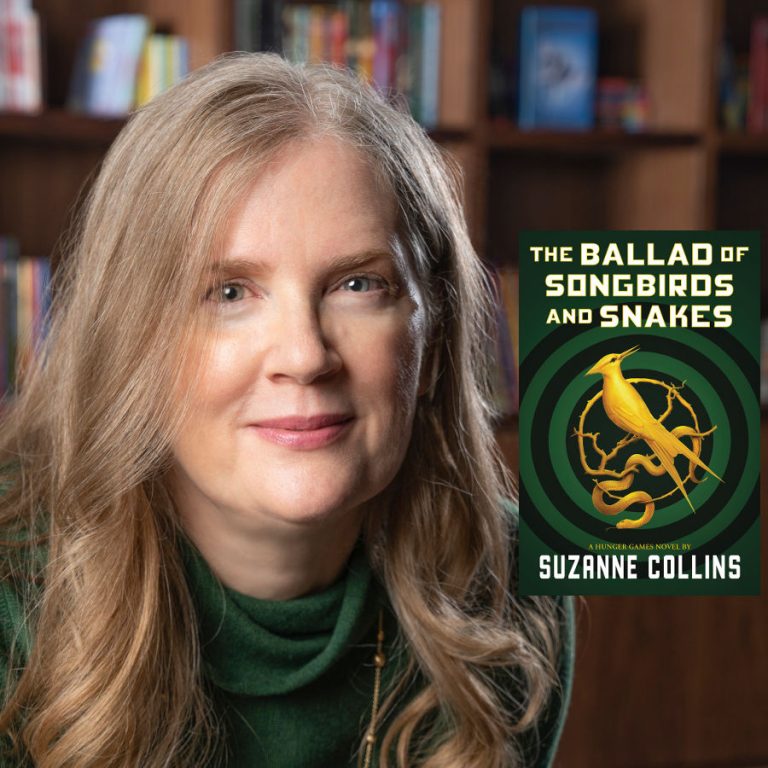 Author and editor David Levithan spent some time with Suzanne Collins to ask a few questions about THE BALLAD OF SONGBIRDS AND SNAKES, her new book which was released today.

The Ballad of Songbirds and Snakes, the much-awaited prequel to Suzanne Collins’ The Hunger Games Trilogy was released today, and if you didn’t know already, it features a much younger Coriolanus Snow.

In the interview, you get to know why Suzanne chose this specific time in the Hunger Games world to write about, a couple of the characters involved, and a tease of why she chose Coriolanus Snow as the main character.

Though many of you have read The Hunger Games, we’ll still warn you that there are some slight spoilers contained in the interview. And after the interview, check out Suzanne reading an excerpt from the book!

David Levithan: I’ll start with the two questions I’m sure most readers will want to ask: Did you always plan to return to Panem after the trilogy with a book set sixty-four years earlier? And if not, what made you return to the story in this way?

Suzanne Collins: Here’s how it works now. I have two worlds, the Underland (the world of The Underland Chronicles series) and Panem (the world of The Hunger Games). I use both of them to explore elements of just war theory. When I find a related topic that I want to examine, then I look for the place it best fits. The state of nature debate of the Enlightenment period naturally lent itself to a story centered on Coriolanus Snow.

Focusing on the 10th Hunger Games also gave me the opportunity to tell Lucy Gray’s story. In the first chapter of The Hunger Games, I make reference to a fourth District 12 victor. Katniss doesn’t seem to know anything about the person worth mentioning. While her story isn’t well-known, Lucy Gray lives on in a significant way through her music, helping to bring down Snow in the trilogy. Imagine his reaction when Katniss starts singing “Deep in the Meadow” to Rue in the arena. Beyond that, Lucy Gray’s legacy is that she introduced entertainment to the Hunger Games.

DL: I have to ask—when you wrote that reference in the first book, did you have any sense of who that fourth victor might be?

SC: Yes, but she’s evolved a lot since then.

DL: What was it like to rewind the world you’d built by sixty-four years? What were some of the touchstones you used to understand what this version of Panem would be?

SC: I really enjoyed going back in time to an earlier version of Panem and visiting the reconstruction period that followed the Dark Days. I thought a lot about the period after the Civil War here in the United States and also the post–World War II era in Europe. People trying to rebuild, to live their daily lives in the midst of the rubble. The challenges of food shortages, damaged infrastructure, confusion over how to proceed in peacetime. The relief that the war has ended coupled with the bitterness toward the wartime enemy. The need to place blame.

DL: What about the early Hunger Games?

SC: Even as the victor in the war, the Capitol wouldn’t have had the time or resources for anything elaborate. They had to rebuild their city and the industries in the districts, so the arena really is an old sports arena. They just threw in the kids and the weapons and turned on the cameras. The 10th Hunger Games is where it all blows wide open, both figuratively and literally.

DL: What was it like to have to dial back a character you created in his late maturity and then to rethink him as an eighteen-year-old?

SC: Well, I thought about Wordsworth’s line, “The Child is father of the Man.” The groundwork for the aging President Snow of the trilogy was laid in childhood. Then there’s Locke, who’s all over this book, with his theory of tabula rasa, or blank slate, in which we’re all products of our experiences. Snow’s authoritarian convictions grew out of the experiences of his childhood, as did his complicated relationships with mockingjays, food, the Hunger Games, District 12, District 13, and women. So, you rewind and plant the seeds.

But given all that, you still need to leave room for Snow’s personality. Is he a product of nature or nurture? Everyone of his generation experienced trauma, loss, and deprivation. And yet Sejanus, Tigris, Lucy Gray, and Lysistrata turned out very differently.

For whatever reason, Snow has a very controlling personality. Then he experiences one of the most out-of-control emotions, falling in love. It turns out to be a bad combination.

About The Ballad of Songbirds and Snakes

It is the morning of the reaping that will kick off the 10th annual Hunger Games. In the Capitol, 18-year-old Coriolanus Snow is preparing for his one shot at glory as a mentor in the Games. The once-mighty house of Snow has fallen on hard times, its fate hanging on the slender chance that Coriolanus will be able to out charm, outwit, and outmaneuver his fellow students to mentor the winning tribute.

The odds are against him. He’s been given the humiliating assignment of mentoring the female tribute from District 12, the lowest of the low. Their fates are now completely intertwined – every choice Coriolanus makes could lead to favor or failure, triumph or ruin. Inside the arena, it will be a fight to the death. Outside the arena, Coriolanus starts to feel for his doomed tribute… and must weigh his need to follow the rules against his desire to survive no matter what it takes.

Order your copy on Amazon, Barnes & Noble, or Bookshop today!