THE SUN IS ALSO A STAR First Look Released 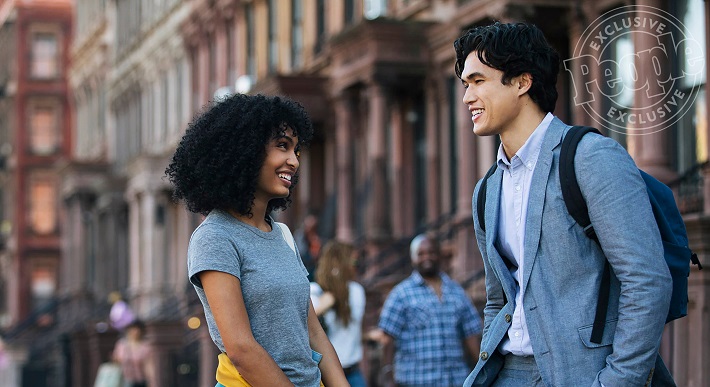 Yara Shahidi (Grown-ish) and Charles Melton (Riverdale) are bringing the beautiful, bittersweet love story of Nicola Yoon‘s The Sun Is Also A Star to the big screen!

The two star as Natasha Kingsley, a Jamaican immigrant who’s a day away from deportation, and Daniel Bae, a first-generation Korean-American immigrant struggling between his parents expectations and his own dreams. When the two meet by chance, they can’t deny their connection, but the world isn’t about to stop for their love story.

Check out the first photo from the movie, released by People.

The magazine interviewed Shahidi and Melton about their characters, who come at things from two different angles.

“Natasha is so into facts and science,” Shahidi said. “I could relate to how dedicated she is to science as a means of honing her expectations and as a means of really understanding the world around her. So many people in her life have let her down, so she turns to science and the facts of gravity and stars as a means of never feeling disappointed again because these are things that aren’t going to drastically change when she wakes up the next day.”

Meanwhile, Melton said Daniel has his head in the clouds, to a certain degree. “His parents are immigrants and he’s a hopeless romantic — and he’s a poet. His parents have kind of been grooming him to be a doctor his whole life. He struggles with kind of two different identities. Not only his identity of being Korean-American, but also with his identity as far as what he wants to do. Making his parents proud, making them happy by being a doctor, or pursuing his life as a poet.”

Shortly after the interview and first image dropped, The Sun Is Also A Star‘s first movie poster dropped!

The two also talked about the beauty of a romantic story that fully embraces an immigration theme and their goals in bringing it all to life.

Best of all, People announced that the trailer for the movie will be dropping TOMORROW, so keep your eyes peeled!

Movie Review: THE SUN IS ALSO A STAR (spoiler-free)