Book Review: THERE’S SOMETHING ABOUT SWEETIE by Sandhya Menon 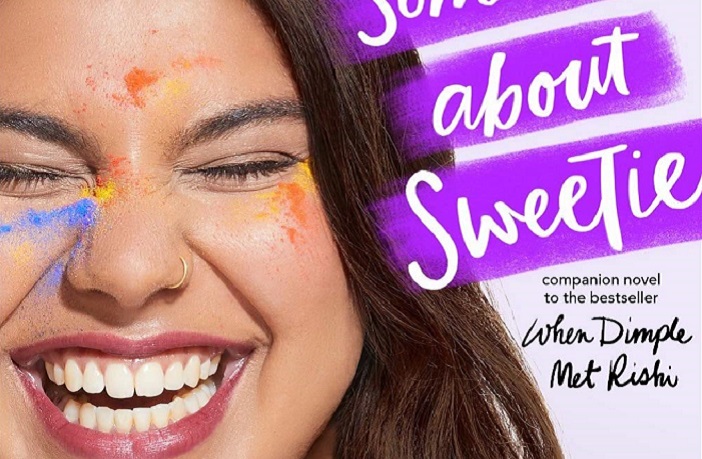 Ashish Patel never had a problem with relationships… until that last one. When his now ex Celia dumped him, Ashish fell into a totally uncharacteristic funk and three months later, he’s still there. Desperate to feel like his old, carefree self again, Ashish takes the wild advice of a frenemy and asks his parents to match him with someone. His parents are delighted and they find the “perfect” girl for him: Sweetie Nair, an athlete and top student from a good Indian family. Dating Sweetie will be the perfect way to finally get over Celia. But when Ashish’s parents try to make the arrangement, Sweetie’s parents say no.

It has nothing to do with Ashish’s dating reputation.. or Ashish at all, for that matter. Sweetie may be breaking track records and on the path to a great college, but she’s still fat– a fact that her very thin mother approaches with equal parts hesitation and horror. Sweetie is outraged that her mother can’t see Sweetie and Ashish as “equally matched,” so she decides to take things into her own hands with Ashish. Well, sort of. Once his parents get involved, it’s wholesome scheduled dates to Indian-centric events only. But Sweetie is still going behind her parents’ backs to live the life she wants, officially kicking off the “Sassy Sweetie Project.”

Neither Ashish nor Sweetie is really looking for a long-lasting relationship to completely shake up their lives, but as time goes on, there’s much more between them than the points they each have to prove.

Sandhya Menon certainly knows how to craft a light, airy romance that will make readers smile. The Ashish we see in this novel is a little different from the one we’re introduced to in When Dimple Met Rishi, but fans of the character will still be plenty happy with him. Readers also get to see more of his home life and his memorable friend group (When do we get a Pinky/Samir novel, Sandhya?!) Sweetie has a supportive but less defined friend group of her own and while I loved her narration on the whole– perhaps even more than Ashish– her home life was tough to swallow. Sweetie’s mother’s shame and hang-ups about her daughters weight probably qualify as emotional abuse, even if she thinks she’s “protecting” her child. It’s hands-down Menon’s most profound storyline yet and not one the story or the author takes lightly. Menon addresses it in an earnest foreword and throughout the novel, Sweetie must learn the earth-shattering message that even the people who love you most can be very, very wrong.

Were you all caught up in Ashish/Celia before? I really wasn’t, so I can’t help much there, but I can confirm that Ashish and Sweetie are super cute! The former relationship was good as a humorous background piece, but the latter has depth. Ashish and Sweetie equally encourage and challenge each other, making for a great team.

Of course, Menon’s novels also clock in on the very innocent side of YA. This works and makes for a novel that’s appropriate for preteens and younger teens, but it can be a little jarring here and there. I could handle things like the odd replacement curse words if it weren’t for one strange habit: These are the most open, earnest characters I’ve ever read in a novel. Everyone says exactly what they’re feeling exactly as they’re feeling it, making intimidating confessions and discussing deep emotional insecurities, in a way that felt super unrealistic for a group of teens. Naturally, with that in mind, things wrap up super neatly without much fuss. Knowing that this is meant to be a fluffy love story, I was mostly able to take it for what it was, but it was a suspension of disbelief.

It you’ve loved Sandhya Menon’s previous novels, you’re absolutely going to fall for There’s Something About Sweetie! It’s an adorable coming-of-age romance with an important message about self-confidence and living for today.

There’s Something About Sweetie is out on May 14, 2019. You can order your copy via Amazon or support your local independent bookstore via Indiebound!

Ashish Patel didn’t know love could be so…sucky. After he’s dumped by his ex-girlfriend, his mojo goes AWOL. Even worse, his parents are annoyingly, smugly confident they could find him a better match. So, in a moment of weakness, Ash challenges them to set him up.

The Patels insist that Ashish date an Indian-American girl—under contract. Per subclause 1(a), he’ll be taking his date on “fun” excursions like visiting the Hindu temple and his eccentric Gita Auntie. Kill him now. How is this ever going to work?

Sweetie Nair is many things: a formidable track athlete who can outrun most people in California, a loyal friend, a shower-singing champion. Oh, and she’s also fat. To Sweetie’s traditional parents, this last detail is the kiss of death.

Sweetie loves her parents, but she’s so tired of being told she’s lacking because she’s fat. She decides it’s time to kick off the Sassy Sweetie Project, where she’ll show the world (and herself) what she’s really made of.

Ashish and Sweetie both have something to prove. But with each date they realize there’s an unexpected magic growing between them. Can they find their true selves without losing each other?