GAME OF THRONES Recap Episode 8×02: A Knight of the Seven Kingdoms 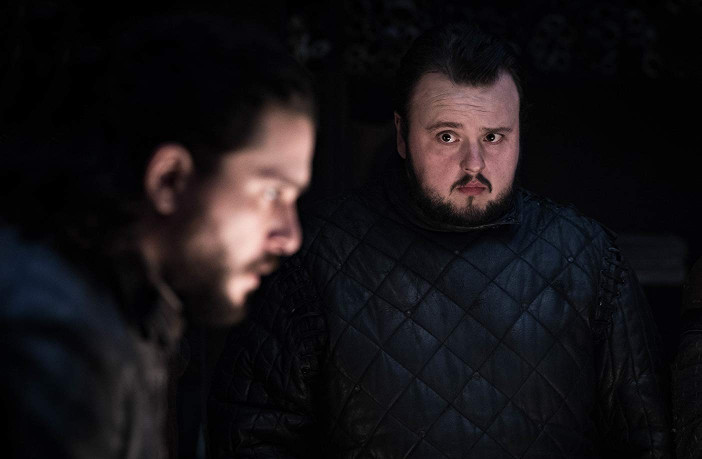 THE CALM BEFORE THE STORM

Before even hopping into the comments I know that there will be people complaining about how this was an episode of nothing… a boring episode because nothing happened. So let’s address this first and foremost.

This episode was brilliant in bringing closure to a lot of characters’ relationships. In the calm before the storm, we saw characters that we love and hate come to terms with the reality of their imminent death.

The tension’s building and the slow pacing of episode two certainly showcased the anxiety being felt by all of our characters as they wait for the war to come.

But during these last few nights before the war, we also got to witness some very warm moments bringing closure to some of our characters and unpacking some baggage from their past.

I think while the first episode focused on Dany (Emilia Clarke) and Sansa (Sophie Turner), this episode really honed in on our ‘secondary’ characters’ development. Most notably, our complicated Lannister one-handed protagonist …. antagonist… protagonist?

Jaime Lannister’s done a lot of cruel things in his past, there’s no doubt about that. But he’s also made up for a lot of it and at the end of the first episode we saw him arrive at Winterfell to pledge his allegiance to Dany and the war effort.

Teaming back up with his younger brother, Jaime (Nikolaj Coster-Waldau) reminds us just how much he has changed over the eight seasons. No longer is he the narcissistic man sleeping with his sister who also pushed a child out of a tower. Instead, he’s now the humbled man who stands by his brother’s side and former enemies. Not only does he swallow his ego to apologize to Bran (though what did Bran’s response mean?!!) but he also shares an extremely sweet moment with Brienne (Gwendoline Christie)when he goes out of his way to knight her, thereby recognizing her strength and bravery and acknowledging all that she has done for not only him but for those around her.

NO DAY BUT TODAY

While Jaime spent his night righting his wrongs, our female characters took a different route. If you watched the episode I’m sure you all know who I’m getting at here.

Our dear Arya is now all grown up!!

We’re probably going to die tomorrow, I want to know what this feels like before that happens.

In a show where characters come and go, it’s easy to forget that Gendry (Joe Dempsie) has been with us from the very beginning. So we’ve seen his relationship with Arya (Maisie Williams)shift and change throughout the years. In what epitomizes a ‘friend-to-lover’ type relationship, Arya’s always been so focused on survival, training, and revenge.

So when we see her showcasing a more human emotion of wanting to feel needed and cared for intimately, it’s only natural that she seeks it from the one man who’s always been by her side and never treated her as an incompetent child.

Sparks are also flying elsewhere in Winterfell when Theon Greyjoy (Alfie Allen) returns and shares a heartwarming reunion with our other female Stark. And let’s not even talk about Dany and Jon (Kit Harrington) who are now faced with the awkward “we’ve been sleeping together but are actually very much related” scenario.

This episode’s been quite the setup for next week’s episode and I know I personally can not wait to see how the showdown goes down.

Game of Thrones airs every Sunday 9PM EST on HBO.