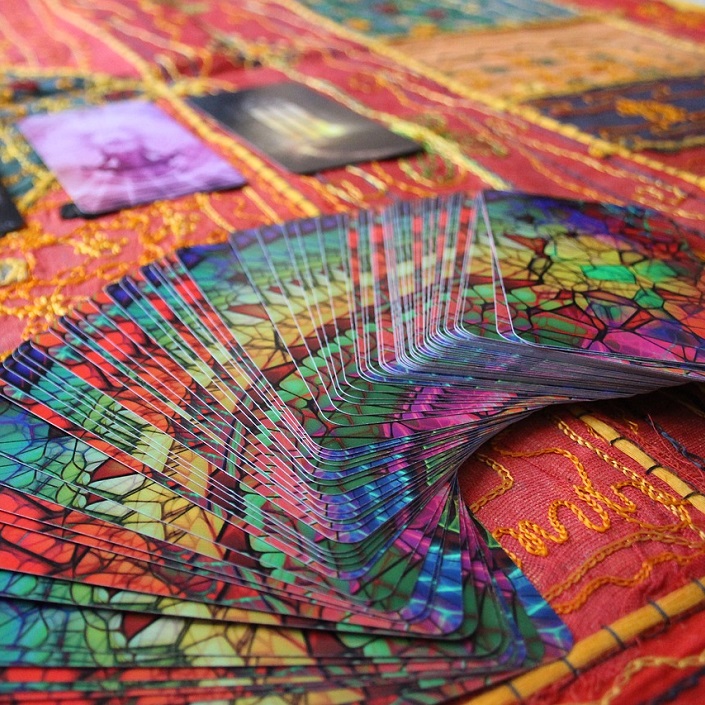 Long-time fantasy readers know that the occult is a constant in the stories that enchant us. Fantasy novels, by definition, involve magic, spirituality, and sight. Set in fictional universes, the fantasy genre is based on speculation and weaving a new world, so it seems natural that tarot readings would play a part in plenty of high fantasy novels. To enjoy free tarot readings you can visit https://www.psychicguild.com/.

With this in mind, today, we are delving into the top five fantasy novels that feature tarot readings and usage. Keep in mind ranking any book in very subjective. Today we will be using good reads voting, sales research, and opinion to list the books. No maths involved.

5 – Divinity and the Python by Bonnie Randall

First and foremost, I place this book at the top of the list because it’s so refreshing for an author not to enact the ‘fraud’ or ‘new age’ trope when it comes to tarot cards and fortune-telling. Our heroine, Shaynie Gavin, is a bartender at the Python Bar saving to fix up an old Morgue, named Divinity. She wholeheartedly lives by and follows her readings of destiny. This makes it easier for readers to suspend disbelief and fully immerse themselves in Randall’s world creation and Shaynie’s dreams for Divinity. This old morgue, which Shaynie hopes will eventually become a tarot card/ upcycled furniture shop, exists as its own character. Through the course of the book, readers become as attached to Divinity almost as much as Shaynie. And the romance! I am a sucker for a good love story subplot and, when the cards bring sexy pro hockey star Cameron to Shaynie, sparks fly. Things get raunchy, so lets MA this book. The book is an excellent mix of mystery, romance, and fantasy, and I can honestly recommend it to any fantasy or occult fiction readers.

4 – The Night Circus by Eric Morgenstern

“You may tell a tale that takes up residence in someone’s soul, becomes their blood and self and purpose. That tale will move them and drive them and who knows what they might do because of it, because of your words. That is your role, your gift.” I mean, come on. How beautiful is that prose? The Night Circus enchanted me. Arguably, this was more artfully written than our number 1 pick, and it has both a star crossed lover charm and mystery that captivates the reader. The tale takes place in the magically created and stunningly written black and white striped tents of Les Cirque des Revés. The circus featuring tarot cards only opens at night and offers an utterly unique experience to visitors. Yet, it is but a stage for the competition that fuels and powers the circus. Two young apprentices, trained since childhood by their respective magical masters, try to outwit and out imagine one another, even as they fall intoxicatingly in love. If you want a stand-alone masterpiece seeped in poetry and imagery that makes your mouth water, this is the book for you.

Get ready for a fast-paced whodunnit with dynamic characters and paranormal charm. Finding decent LGBT+ fantasy can be a challenge. Sometimes it’s just queerbaiting (I love Throne of Glass, but S.J Maas is a guilty example of this). Occasionally it’s writing queer characters where their sexuality is their sole identity trait. Not with Fenraven’s brilliantly written and devised fantasy. GrayVecello hates having the gift. But when he casts the tarot cards for the first time in years and foresees his estranged grandfather’s death, he feels guilty at not having mentioned it. Inheriting a houseboat from said deceased, Gray encounters young Cooper-Key, who has taken refuge there after his parents disowned him for coming out. Cue the flirty drama and banter. Amid the hot guy revelation, we discover that his grandfather, and an increasing amount of others, have been murdered, and it’s up to our young couple to figure out how by who and why.

2 – The Raven Boys by Maggie Stiefvater

Full disclosure if GoodReads or sale statistics didn’t mediate this list, I would put this series at the top of my list. Even a non- fantasy list. Any list. I literally could not put this brilliantly told and compellingly characterized novel down. The blurb undersells The Raven Boys series, so bear with me. Blue is the daughter of a seer and her coven-like household of psychics. Every year she walks the death walk with her mother, and one year, despite Blue not having the sight herself, the spirit of a boy approaches her.

“‘There are only two reasons a non-seer would see a spirit on St. Mark’s Eve,’ Neeve said. ‘Either you’re his true love…or you killed him.'” Thus begins our tale, and soon we are introduced to the four Raven Boys – a mixture of privilege, charms, brains, death, and anger all wrapped up in holistic and fleshed out characters, equipped with fully developed histories. Prepare to become attached to stories, discoveries, and the tarot card motifs that leave you hungry for more. I read all four books in this series over five days, and I would happily do so again. I have. I have now finished this series three times. They are easy, accessible, and folklore-inspired reads that will both sate and seduce you. If you can’t already tell, I’m a big fan.

Forget the movie with young Johnny Depp and beautiful music, because this book is a poetic and spiritual exploration of one woman’s harmony and independence. It stands completely alone as a novel seeped in sensual imagery that blends food, love, parenting, and justice with a delicate dose of the psychic and tarot cards. Chocolat sneaks its way into many literature lists, mainly because the prose is so sweetly smooth and poignant. I remember finishing the first page and feeling like I had taken a sip of champagne. The words melted on your tongue, and characters were carried along by a sense of calm assurance. Even when evil and malicious characters arise, readers know that justice will follow. On the surface, this is a magical surrealist fantasy about a chocolatier who relocated to an evangelical, straight-laced, and small-minded town in the middle of lent. Underneath, it’s a tale about awakening joy and sensuality, knowing oneself, and overcoming the stigma of silence. A beautifully crafted story with tarot card motifs, this is a natural addition to this list.