THE TRIALS OF APOLLO: THE TOWER OF NERO Cover Reveal & Excerpt 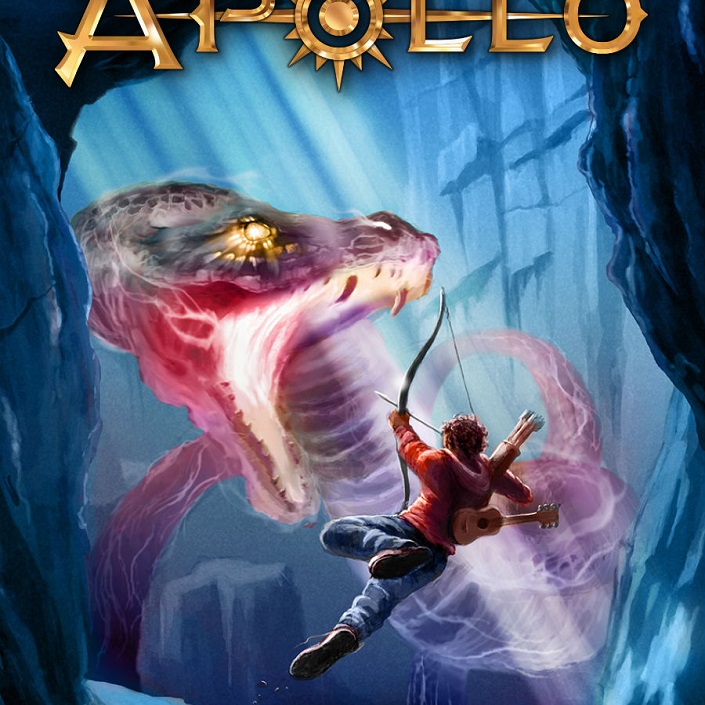 The chaotic human life of Apollo (aka Lester Papadopoulos) continues in The Trials of Apollo: The Tower of Nero!

Hypable shared the brand new cover design and first two chapters of the fifth book in Rick Riordan‘s series, which is due to hit shelves this fall.

The cover features Lester, bow and arrow in hand, facing off against his arch nemesis Python in what appears to be a cave or ravine. The scene looks action-packed and ethereal all at once– quite a feat from artist John Rocco.

Can’t wait to get started on The Tower of Nero? Check out chapters 1 and 2!

When traveling through Washington, DC, one expects to see a few snakes in human clothing. Still, I was concerned when a two-headed boa constrictor boarded our train at Union Station.

The creature had threaded himself through a blue silk business suit, looping his body into the sleeves and trouser legs to approximate human limbs. Two heads protruded from the collar of his dress shirt like twin periscopes. He moved with remarkable grace for what was basically an oversize balloon animal, taking a seat at the opposite end of the coach, facing our direction.

The other passengers ignored him. No doubt the Mist warped their perceptions, making them see just another commuter. The snake made no threatening moves. He didn’t even glance at us. For all I knew, he was simply a working-stiff monster on his way home.

I whispered to Meg, “I don’t want to alarm you—”

Meg took the quiet-car rules seriously. Since we’d boarded, most of the noise in the coach had consisted of Meg hushing me every time I spoke, sneezed, or cleared my throat.

“But there’s a monster,” I persisted.

She looked up from her complimentary Amtrak magazine, raising an eyebrow above her rhinestone-studded cat-eye glasses: Where?

I chin-pointed toward the creature. As our train pulled away from the station, his left head stared absently out the window. His right head flicked its forked tongue into a bottle of water held in the loop that passed for his hand.

“It’s an amphisbaena,” I whispered, then added helpfully, “a snake with a head at each end.”

Meg frowned, then shrugged, which I took to mean: Looks peaceful enough. Then she went back to reading.

I suppressed the urge to argue. Mostly because I didn’t want to be shushed again.

I couldn’t blame Meg for wanting a quiet ride. In the past week, we had battled our way through a pack of wild centaurs in Kansas, faced an angry famine spirit at the World’s Largest Fork in Springfield, Missouri (I did not get a selfie), and outrun a pair of blue Kentucky drakons that chased us several times around Churchill Downs. After all that, a two-headed snake in a suit was perhaps not cause for alarm. Certainly, he wasn’t bothering us at the moment.

I tried to relax.

Meg buried her face in her magazine, enraptured by an article on urban gardening. My young companion had grown taller in the months that I’d known her, but she was still compact enough to prop her red high-tops comfortably on the seatback in front of her. Comfortable for her, I mean, not for me or the other passengers. Meg hadn’t changed her shoes since our run around the racetrack, and they looked and smelled like the back end of a horse.

At least she had traded her tattered green dress for Dollar General jeans and a green vnicornes imperant! T-shirt she’d bought at the Camp Jupiter gift shop. With her pageboy haircut beginning to grow out and an angry red zit erupting on her chin, she no longer looked like a kindergartner. She looked almost her age: a sixth grader entering the circle of hell known as puberty.

I had not shared this observation with Meg. For one thing, I had my own acne to worry about. For another thing, as my master, Meg could literally order me to jump out the window and I would be forced to obey.

READ THE FIRST 2 CHAPTERS IN FULL VIA HYPABLE!

The Tower of Nero hits shelves on September 29, 2020. You can preorder it now via Amazon, B&N, or Indiebound!