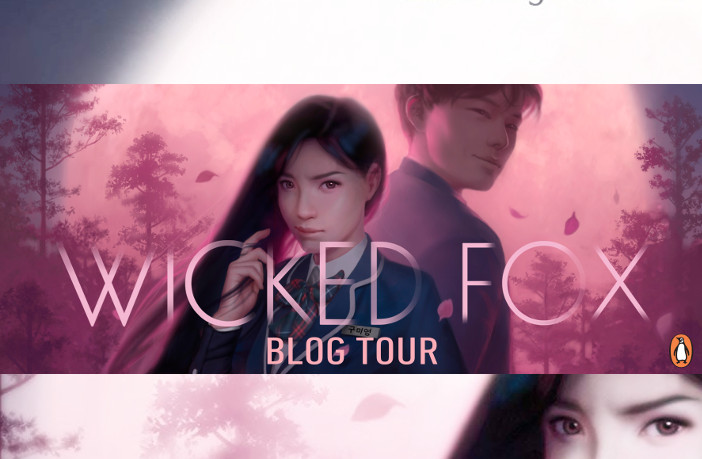 In this stop of the WICKED FOX Blog Tour, we asked author Kat Cho all about her debut book and gumiho of Korean myth, as well as details on Korean food, TV, and music!

What books, TV shows, or movies inspired you to write Wicked Fox?

I was definitely influenced by the storytelling in anime and Korean dramas. I love how character based they are without losing any of the high adrenaline from action and fast-paced plot. K-dramas that influenced Wicked Fox directly include Goblin, Oh My Ghostess, School 2013. I am also very much influenced by amazing storytellers like Renee Ahdieh, Cindy Pon, Rick Riordan, Holly Black and Laini Taylor. I would never claim to write like any of them, but they definitely are a constant inspiration with each new book of theirs I read. I love how they weave magical elements into things that could feel every day to us. Like the food in The Wrath and the Dawn, the female relationships in Serpentine, the growing pains in Percy Jackson, the contemporary settings with magical atmosphere in Darkest Part of the Forest, and literally EVERYTHING in Laini Taylor’s Daughter of Smoke and Bone series feels like you’re meeting old friends and experiencing something magical at the same time. I also really admire the wit and dialogue inn Sarah Rees Brennan’s The Lynburn Legacy trilogy.

What is it about a gumiho that you really wanted to write about?

I wanted to write about a creature that was rooted in Korean culture and mythology. There was a time when someone asked me if I could set the story in the US. And I thought very seriously about it, but the tale of the gumiho feels like it belongs in Korea and that’s what I liked about it. I wanted something that couldn’t just be transplanted into another place because Korea holds my roots and my heart. I also really liked the idea of subverting an “evil monster” trope where the female was the supernatural being.

How much research did you do on the gumiho?

I did a lot of research. Despite being able to incorporate a lot of my personal experiences and feelings growing up in a Korean household, it was very important to me to get the feel of Korea itself correct. And while I’ve studied and visited Seoul a lot over the course of my life, I’ve never lived there for prolonged periods of time. So, while I was writing I visited again (twice) and I also made sure that any place I was writing about were places I had personally spent time in. I also wanted to make sure I was getting the history of Korea correct as I was incorporating it into the mythology interstitials throughout the book. But the good thing for me is that I love history and research. So I spent a lot of time reading historical texts and trying to source materials that came directly from Korea (instead of an interpretation text)

Your story centers on a creature that devours the energy of males to survive. Would you consider the gumiho to be a “strong female character” and why?

I think that, like many YA authors, I hate the phrase “strong female character.” I think female characters, just like male or male-presenting characters, are very nuanced. I think that many of the female characters in my book have a lot of strengths and they have survived some harsh things during their lives, but on the other side of the coin, they are also using that strength to hide a lot of weakness. It’s just all about how it manifests in their interactions with others. My biggest goal was to show that Miyoung, despite trying to seem tough, was really sensitive on the inside. And Jihoon was the first person who ever encouraged her to truly explore that side of herself.

The illustrated cover looks amazing. Did you have any say on it?

I was so lucky that I was able to consult on the cover. I absolutely adore the design team at Penguin and I had a lot of trust in them after initial conversations about the directions they wanted to take the cover. They they hired the uber talented Miranda Meeks and I was very confident she’d be able to deliver a stunning illustration. The first time I saw my character brought to life I was so happy. Miranda very clearly captured Miyoung and Jihoon’s spirits in a way that paid tribute to the K-drama and anime inspirations that went into writing Wicked Fox!

You have a love for k-drama and k-pop. Any recommendations on those who are interested in it and don’t know where to start?

Yes! I’ll just give “beginners” dramas and bands so that you’re not too overwhelmed hahaha.

For K-drama: Boys over Flowers (high school drama with romance), School 2013 (high school drama that centers of school life, teenage angst and friendship), Heirs (compared often to Gossip Girl), Moonlight Drawn by Clouds (historical drama with a sweet romance), Goblin (a drama that takes place in modern day Seoul but has roots in Korean mythology), My Love From Another Star (another modern day drama about an alien who was abandoned on earth in the ancient Joseon period and is searching for a way back home), Descendants of the Sun (a drama about a doctor who meets a soldier while they’re both stationed in the middle east), W: Two Worlds (a drama about a graphic novel character that comes to life and the girl who gets caught up in his world).

And any Korean food that you’d recommend for first timers?

You can’t go wrong with Korean BBQ. I’d say go for Kalbi or bulgogi. If you like pork you can get samgyupsal. If you like stew then I love kimchi jjigae or soon dubu jjigae.

If you are out drinking (soju is the drink of choice in Korea) then some good drinking snacks are pajeon, mandoo, ddeokbokki (spicy rice cakes).

If you like sweets then check out boongeobang (a type of pastry shaped like a fish and filled with yummy fillings like red bean paste or match green tea paste).

Eighteen-year-old Gu Miyoung has a secret–she’s a gumiho, a nine-tailed fox who must devour the energy of men in order to survive. Because so few believe in the old tales anymore, and with so many evil men no one will miss, the modern city of Seoul is the perfect place to hide and hunt.

But after feeding one full moon, Miyoung crosses paths with Jihoon, a human boy, being attacked by a goblin deep in the forest. Against her better judgment, she violates the rules of survival to rescue the boy, losing her foxbead–her gumiho soul–in the process.

Jihoon knows Miyoung is more than just a beautiful girl–he saw her nine tails the night she saved his life. His grandmother used to tell him stories of the gumiho, of their power and the danger they pose to men. He’s drawn to her anyway. When he finds her fox bead, he does not realize he holds her life in his hands.

With murderous forces lurking in the background, Miyoung and Jihoon develop a tenuous friendship that blossoms into something more. But when a young shaman tries to reunite Miyoung with her bead, the consequences are disastrous and reignite a generations-old feud . . . forcing Miyoung to choose between her immortal life and Jihoon’s.

Wicked Fox comes out in stores on June 25th, but you can order your copy at any of the following: