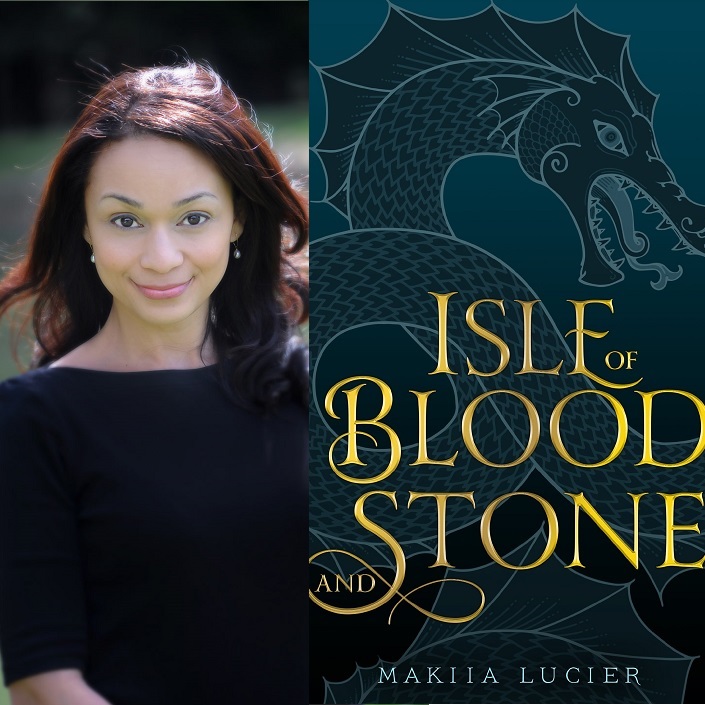 If you love your books to take you on a mysterious journey into the unknown, look no further than Makiia Lucier‘s Tower of Winds duology! It has everything: Deadly mysteries, rich fantasy worldbuilding, simmering romance, and characters that are daring and relatable.

We sat down with Makiia Lucier at YALLfest to talk about Isle of Blood and Stone, Song of the Abyss, crafting worlds, writing on a deadline, and her next novel Wake, among other things. Check out the interview below!

What was your inspiration for the Tower of Winds world?

If I’m gonna write a book, it has to be about a story I’m interested in. Because you’re working on a story for months, sometimes years. The whole Tower of Winds duology was based on my love of the Indiana Jones movies. I wanted a character who is smart and funny and someone who used his brain to work his way out of difficult situations. I love the history of the Indiana Jones movies and I’ve always loved old maps– Not those ugly maps you always see in your Social Studies books. Not the blue ones, but the pretty ones with the monsters in them. So it was a combination of Indiana Jones and history and maps. And if just kind of [makes whooshing sound]and warped together.

You use some wild little bits of history like burial rituals and the plague. Has that sort of stuff always fascinated you in itself?

It has always fascinated me! I’m a giant germophobe, but I’ve always loved reading books and watching movies about plague. You see this gross thing… and it’s interesting! And I was a librarian in a former life, so I love the research. I like, as a writer, to go back in history and find those little bits of history that you don’t know a whole lot about– like medieval mapmaking– and just researching the heck out of it and building a story around it.

When did you first know that your sequel to Isle of Blood and Stone was going to feature Reyna?

I wrote Isle of Blood and Stone in its entirety, and then I sold it. And then we just kind of tacked on this extra book to the deal. So I had a two-book deal and I didn’t know what the second book was going to be about. I just knew I had a deadline. I just had to come up with something. In the middle of Isle of Blood and Stone, there was this character– a nine-year-old girl named Reyna. I was going to cut her out. I didn’t really care about her that much. But as the drafts progressed, she just kept going. She refused to go away, that kid! And then I thought “She would make an interesting main character… as a 17-year-old.” Over the months, it just slowly built in my head.

When you were writing Song of the Abyss, did you know what your then teenage characters from Isle of Blood and Stone would be like at nearly 30? Or did that come as you wrote?

It came as I wrote. Most things come as I write. Most days, I’ll sit down with a blank notebook and think to myself or think aloud “I have no idea what I’m doing!” [laughs]I don’t really plan the books in advance. So I just write and see where it takes me.

So what character would you say you relate to the most and why, out of any of your characters?

I think a lot of characters I wrote are orphans, but there’s Mercedes, who lost her mother. And when I wrote Mercedes in Isle of Blood and Stone mourning her mother, I had just lost my mother. So there’s something very personal. Mercedes is also a little bit reserved, she’s not a huggy feely type. Maybe that character, more than anyone, I see myself in there a little bit.

I know it’s still too early to talk too much about her next book Wake, but what can you tell us?

I just turned in, last week, my first draft of Wake, so I feel like I’m just recovering from some awfulness! [laughs]I worked on that first draft for ten and a half months. I’m a slow writer. What Wake is– It takes place in the aftermath of the Black Death in the 14th century. It’s set in a fictional version of the medieval Spanish mountains, and I just built up the story around that background. I wanted to see– You know how when you watch a plague movie or a zombie movie, you get the middle of the plague once the action starts? I wanted to see the aftermath. How do these people go on with their lives when their families are gone? When whole villages, whole cities are gone? How do they rebuild? That’s really what I wanted to explore in Wake, but also there’s a mystery thrown in at the core of the story.

You love mysteries! Even when there’s a million things happening in the world, there’s always something to figure out in there.

You need a plot!

How would you describe your writing process?

On a normal day, at like 9 o’clock in my crudy home clothes, I’ll sit down in my blue chair with a notebook and a pencil. I write longhand until about 1ish, when I eat lunch, and then it’s time to pick up my kid and turn back into a mom. But that’s a normal, pleasant relaxed day. When you’re under a stricter deadline, it’s all day, every hour of every day. You’re always thinking about your book. You have the notebook by your bed. You fall out of bed and just start writing. It’s madness. There’s just two extremes of my writing, really.

When you turn in that draft, you look just terrible. Your hair is huge, you haven’t showered in a while. You’re a mess! So when you send off that email, it’s the biggest relief ever. For your family too, because they have to live with you.

A lot of you holed up in a room and them whispering “Don’t bug her unless you have to”?

If you weren’t an author, what do you think you’d do?

I have my librarians degree. I would so hope to become a librarian again. I love when your days are just surrounded by books and stories. That’s all I want.

Is this your first YALLfest?

What are you looking forward to the most?

It’s my first time moderating at YALLfest, so I’m just looking forward to seeing everyone. My signing is just at noon, so I know have old friends to visit and new readers to meet. And I’ve also never been to Charleston, so I just want to wonder! I want to see the battery where they have the historic homes along the harborfront.

Thank you so much for chatting with us, Makiia!

The Tower of Winds novels, Isle of Blood and Stone and Song of the Abyss, are available now via Amazon or Indiebound!

Book Review: SONG OF THE ABYSS by Makiia Lucier