YOU can go to Hogwarts!

What? You thought I was kidding? Warner Bros. Studios of London is giving tours of the Harry Potter film studios! 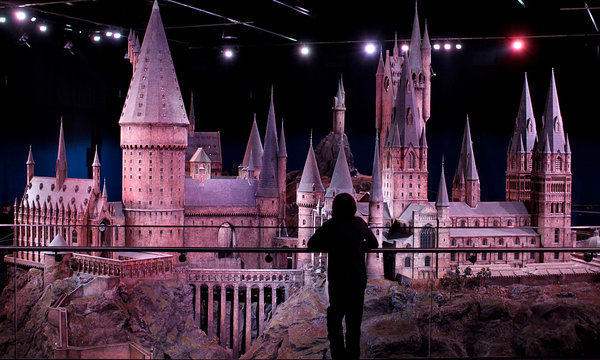 Tours have been running starting this year, as early as March, and you can book YOURS at http://www.wbstudiotour.co.uk/

Sarah Lyall, writing for the New York Times, presented us with a description of the tour.

“When they made the hourglasses that keep track of the house points,” he continued, referring to Gryffindor, Hufflepuff, Slytherin and Ravenclaw, the four Hogwarts houses, “they used so many beads that they created a national bead shortage in England!” [Dan] beamed. (Dan is a tour guide, who was a Slytherin extra in the movies)

The tour, which is mostly self-guided, takes place in two vast Warner Bros. sound studios on the Leavesden Studios lot, about 20 miles northwest of London, where the Harry Potter movies were filmed. There are complete sets, like the Gryffindor boys’ dormitory, with its velvet-trimmed four-poster beds. There are the tiniest of props, like the flurry of hand-engraved envelopes announcing Harry’s acceptance to Hogwarts. Here is everything you wanted to know, and also everything you didn’t know you wanted to know.

My daughter Isobel, 12, and I had been worried about expectation inflation when we set out by car from West London, about a 40-minute trip. But our hearts lifted when in the distance we spotted something that looked suspiciously like the wizarding world’s version of public transportation, the magical three-decker Knight Bus (it was).

You can read the entire article here, and buy your tickets here!

(Just a disclaimer- the studio is in London. If you don’t live in the British Isles, you might want to reconsider going)