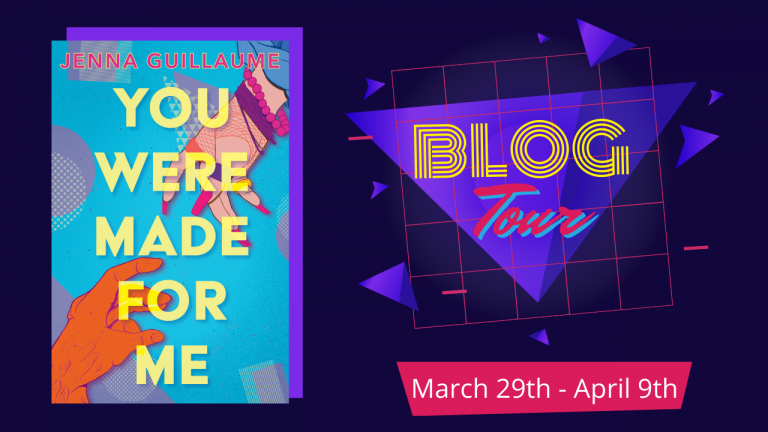 Welcome to the You Were Made for Me Blog Tour!

To celebrate the release of You Were Made for Me by Jenna Guillaume on April 1st, blogs across the web are featuring original content from Jenna, as well as 10 chances to win the hardcover!

Differences Between You Were Made for Me and Weird Science

You Were Made for Me began with the very first line: “The day I created a boy started out like any other.” It entered my head seemingly out of nowhere, and I immediately saw a quick succession of scenes unfold like a movie montage in my mind. They became the first section of the book—right up to the moment Guy appears in Katie’s bedroom.

I quickly realized the concept was very similar to Weird Science, and that this story would be a good opportunity to take that male gaze-centric movie and flip it entirely. I wanted to create a book that explored and empowered the female gaze and a pair of teen girls unashamedly figuring out their desires and feelings.

Re-watching the movie confirmed to me that there was a lot to work with, both in terms of the concept in general and putting my own spin on it. Here are some of the ways I did that…

Weird Science is about two horny nerd boys who are obsessed with two girls at school. The girls themselves don’t really get personalities. The boys then accidentally create their perfect woman one night from a literal doll (more on that in a second), meaning she’s an actual object come to life to fulfil all their fantasies and serve all their needs. I knew I wanted to give all the characters in my story more layers than the Weird Science girls get, and for my perfect fantasy guy to actually get an inner life, agency, and a character arc of his own. He starts out an object, but part of his journey is becoming the subject of his own life.

The act of creation

I wanted You Were Made for Me to feel really contemporary. Even though this bizarre, over-the-top thing happens, giving it a light fantasy element, I still wanted it to be very grounded in reality. I struggled with figuring out exactly how Guy is created. But when I re-watched Weird Science, I realized the way the woman in it is created makes no sense. There’s a doll, a computer program, and a lightning strike. That’s it. So I decided if nonsense was good enough for the boys, it was good enough for the girls. I put a bunch of ingredients on the page—a clay figurine, a chemical mixture, a storm, a tear, and a kiss—and left it up to the reader to figure out exactly what happened. Or not, as the case may be—at the end of the day, how Guy is created doesn’t really matter. The fact he exists is what’s important. And going back to the grounded-in-reality intent—unlike Weird Science, Guy’s creation is the only “magical” part of the story.

Weird Science takes place over one very intense and wild weekend, with a focus on a huge party. In the very early stages of writing You Were Made for Me, I did consider a similar timeline. I really enjoy stories that take place over one night (or two nights, in this case). But I quickly came to the conclusion that there wouldn’t be much I could do with the plot within such a framework (in fact, there is not much plot to speak of in Weird Science). I wanted more time for all the characters to grow and develop. And while there is a party in You Were Made for Me, it’s nothing like the one that happens in Weird Science (certainly no Mad Max characters make an appearance!).

“Plenty of early 2000s rom-com vibes and lighthearted mishaps… Guillaume’s cinematic story weaves together beloved romantic comedy tropes touched with magic—or is it science?—and drops them into a fresh, contemporary setting. Despite the playful tone, this isn’t without nuance, taking on serious topics such as male body image, friendship, and asexuality.” —Booklist

YA author Jenna Guillaume is back with a fun and modern feminist twist on the 1985 pop cult film Weird Science.

Sixteen-year-old Katie Camilleri can’t believe she’s accidentally created a teenage boy. A boy six-feet tall with floppy hair and eyes like the sky on a clear summer’s day. A boy whose lips taste like cookie dough and whose skin smells like springtime. A boy completely devoted to Katie. But silly musings and kitchen antics with her best friend, Libby, have definitely taken a whimsical twist into something bigger than Katie could have ever daydreamed. Turns out the consequences of fumbling a human being into existence are rather complicated. More importantly, does Guy, the golden Adonis Katie’s created, like her because he wants to, or because he has to? And will he be Katie’s very first kiss?From the author of What I Like About Me comes a hilarious feminist twist on a classic narrative, loaded with laughs, mishaps, and plenty of 80s and 90s pop-culture callbacks. Jenna Guillaume’s entertaining romantic comedy novel features a humorous and relatable voice and will appeal to fans of Jenny Han.

About the Author: Jenna Guillaume was the editor-at-large for BuzzFeed Australia, where she wrote about very important things like pop culture, identity, feminism, social media, and Chris Hemsworth’s biceps. Previously, she spent more than half a decade in the features department of Girlfriend magazine, editing the sealed section (yes, all those questions are real), and writing about everything from bullying and body image to bad kisses and boy bands. She was also a contributor to Girlfriend Life Hacks, an essential guide to navigating a girl’s completely-awkward-but-totally-awesome teen years.

Jenna Guillaume Talks WHAT I LIKE ABOUT ME In New Video, Plus Giveaway & Live Chat